In my part of the world, March is the month when winter very slowly and reluctantly gives way to Spring. When I was in elementary school, I stumbled across a story set during this tempestuous season, called Troll Weather. Troll Weather became one of my most beloved books, and I still re-read it every year. 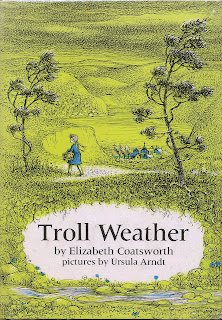 Written by distinguished children's author Elizabeth Coatsworth and delicately illustrated by the equally esteemed Ursula Arndt, it tells the story of a little girl named Selma who lives on the shores of a Norwegian fjord. One day Selma, sent on an errand by her mother, takes a basket of food to the Widow Paulsson, who lives high up in the mountains. The weather turns wild, as frequently happens in March, and the Widow Paulsson tells Selma stories of the trolls, who revel in such storms. Selma becomes a bit obsessed with trolls as the story unfolds, and anxiously asks her older sister, Sigrid, for information. One of my favorite passages describes Selma taking out the family's pine cone trolls who are on display in the space between the inner and outer windows of the kitchen: 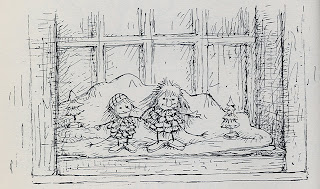 "On the sill of one of the windows facing the road stood the pine cone trolls, with their wooden faces and their big wooden hands and feet and their long gray lichen-colored hair. Their kingdom lay between the inner and outer windows and each year it changed. Sometimes they peered from caves among piled-up stones; sometimes they were in a mossy forest of little pine trees. This year Sigrid had stood them on a mountain of cotton-batting snow. Selma ran to fetch their box from the back of the cupboard. First she carefully put away the cotton. Then she paused with the man troll in one hand and the woman in the other, their mouse tails hanging down. She didn't put them in their box at once. The woman troll was smaller than the man and had a cotton handkerchief tied over her coarse gray hair. But otherwise, they looked alike. Their eyes were little and their noses were long and their mouths were crooked. Selma stared at the little trolls and the trolls stared back at Selma. When Sigrid went by, Selma said in a whisper, 'Are they real, Sigrid? Are there real trolls?' 'There they are, right in your hands,' said Sigrid, laughing. 'They are as real as bread and butter.' But that wasn't what Selma meant. Whenever she asked about trolls, Sigrid wouldn't take her seriously. At last, sighing and wondering, she put the pine-cone trolls safely in their box until, in November, the cold and darkness of autumn should bring them back to their narrow kingdom between the windows." 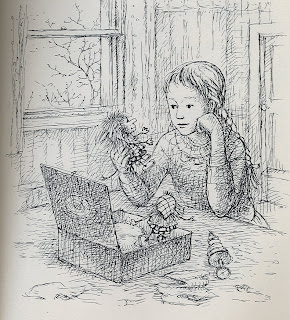 For some reason, this beautifully written passage just captivated me as a child. Like Selma, I became obsessed with the idea of a little family of troll dolls, living in small spaces within our house. Perhaps they could move into the pigeonholes of the roll-top desk, I reasoned, or the little cupboard above the sink that was too high to be of much use. Unfortunately, I had missed the 1960s troll craze by several years, and it wasn't until recently that I began amassing my own troll collection. This month I'll highlight some of my favorites.

I'll start with these two homely specimens, of a similar variety to Selma's pine cone trolls. Made in Scandinavia from native wood, rabbit fur, and pine cones, they offer a tangible link to the story of Troll Weather. What makes them even more special, though, is that they came from the estate of Pat Peterson, who wrote one of the best books on vintage trolls, Collector's Guide to Trolls, published in 1995. They can be seen on page 72, looking a bit fresher than they do now! 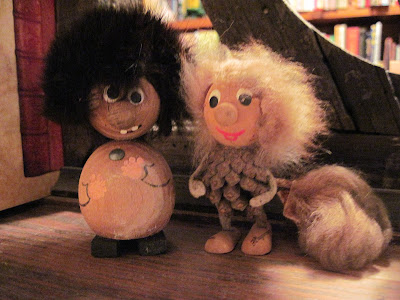