Who is this cutie? A Snow Baby Doll, from the early 1900s. And she's not just cute: she has a fascinating history, too. 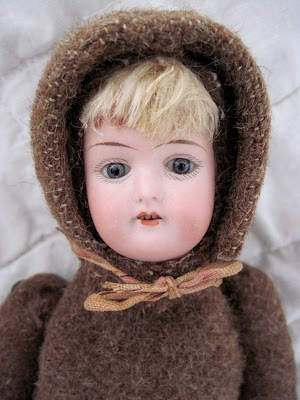 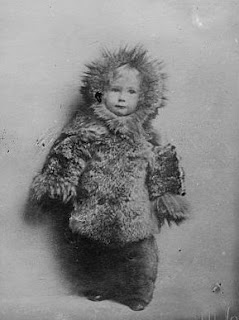 In 1893, Marie Peary was born in the wilds of Greenland, the daughter and first child of Arctic explorer Robert E. Peary and his wife Josephine. "Society" was shocked that he had taken his wife along on this expedition, and were concerned for the child's health, but she and her mother seemed to thrive in the Arctic. Mrs. Peary, a former society figure herself, actually hunted caribou and fought off attacking walruses alongside her husband and their guides. Marie and her mother accompanied Peary on several more trips, and photographs of blond, blue eyed Marie dressed in her Arctic furs made it back to America, where enthralled readers followed her exploits in the newspapers. Entrepreneurs were quick to capitalize on Marie's popularity, and produced this novelty, the Snow Baby Doll, in many forms. The best were delightful likenesses of Marie, and appear to be based on this most famous photo. 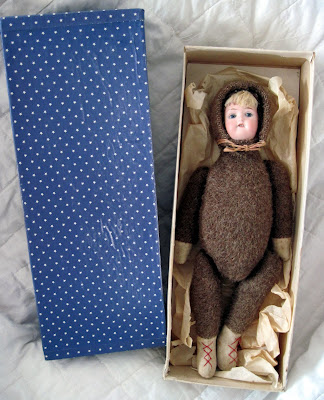 This example is tissue mint in its original box, which is covered with blue paper dotted with white stars, reminiscent of the polar sky. The doll is 11 inches tall, with a bisque head inserted into a wool bodysuit, the hood still tied with its original ribbon. Integral white felt mittens and boots, trimmed with red laces, distinguish the Snow Baby from the otherwise similar Teddy Girl or Teddy Doll. 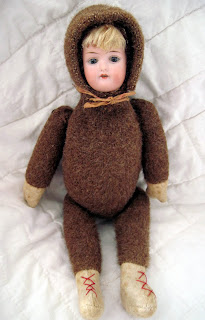 A wonderful book about Marie Peary's Snow Baby years was recently released; read about it  here. It's full of incredible images of Marie, her parents, and their adventures.

Ooooooh: just found a vintage, MIP 1970s Gumby. I feel a compulsion to free him from his plastic prison...poor guy, he's probably so tired of holding his arm up for the past 30 years. 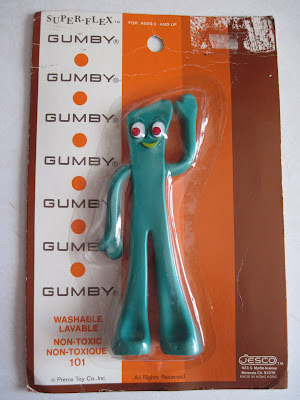 The spy craze of the 1960s turned out tons of related toys, and one of the best was Transogram's 1966 Spy's-a-Poppin, a target game/playset with fantastic design and tons of action features. The huge, 27 inch tall set enabled the player to enter the world of spy films, complete with exploding bombs, damsels in distress, sinister cloaked spy masters, secret hideouts, and, of course, a really cool (dart) gun. Sadly, the gun is almost always missing from this rare set when found (although mine does still have the "Magi-scope"): kids would, naturally, have used the gun in all sorts of other play. Even without a gun, though, the set is a precious find. Its fragility and size led to most being thrown away by spring-cleaning parents. 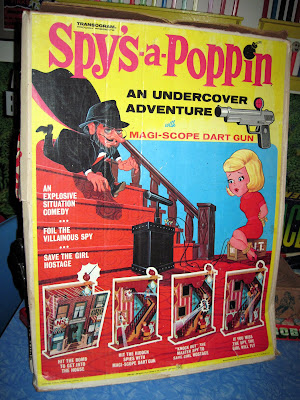 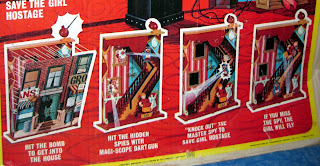 Box detail, with directions for play.
Here's how it worked: you, the good spy, are in pursuit of a bad spy. You've tracked him to his secret lair, tucked into a dilapidated brownstone next to a pawnbroker's. See your shadow on the steps? You're even wearing a trenchcoat and fedora! 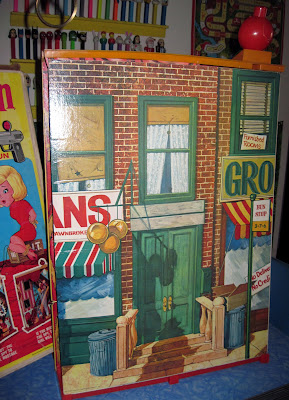 Now, you have to get into the hideout. You decide to blast your way in. Subtle, you are not. The instructions tell you: "First you must get into the house. How can you do this? Well, the only way is to 'blow up' the front...and that's just what you'll do." On the top right of the building is a giant red plastic bomb. The instructions say: "Take careful aim at the bomb with your gun and shoot! Hit the bomb on top of the chimney and the front of the house falls down!" And it does! 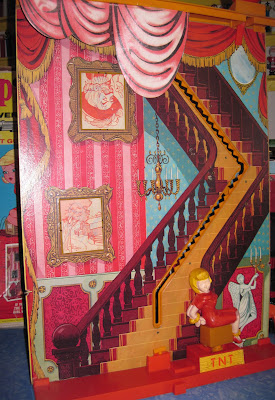 The whole front panel of the building falls forward, revealing a tense situation: a beautiful blonde girl tied to a box of TNT. The instructions make sure you realize the gravity of the situation: "Holy Fallen Arches! You must watch your step because there is evil afoot inside!" 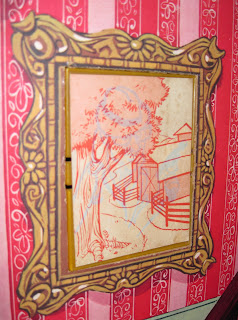 Next, you are told to "slowly study the situation. Look through the infra-red scope on your gun to see what danger lurks behind those innocent looking pictures on the wall." And danger does indeed lurk: the red filter on the gun's "scope" reveals a spy hiding behind the picture. If you look very closely, you may be just able to see his outline here:


"Behold! There are two sinister looking characters watching your every move!" continue the directions. "You must erase them from the scene."

Shooting the pictures with the dart gun knocks them clean out of their frames, along with their hidden spies, presumably. But what's this? Apparently one of the spies was "only wounded," and has given "a signal to the Master Spy hidden at the top of the stairs! THE JIG IS UP! OH, WOE, WHAT CAN YOU DO NOW?"  The instructions are just as fabulous as the game itself, really. I'm guessing an unemployed screenwriter or English Lit. grad wrote them. But incidentally, wouldn't the "jig is up" moment have been when you blew the front of the hideout off? A logical misstep, there.

Anyway: as the top picture is knocked from its frame by your dart, it releases a catch holding the Master Spy in place behind the curtains. He begins clacking his way down the staircase, "hurrying to the bottom to 'do in' that poor, innocent girl tied to the TNT box..."

This is when the tension really ratchets up: the Master Spy descends alarmingly quickly on his way to the detonator, and as usual, the instructions convey the seriousness of the situation: "Take aim...steady now...mustn't bungle it! You must hit him before he reaches bottom. If you don't, he'll push the lever and...ZOWIE! But...if you're quick and have a sharp eye, you can save the girl...you're a HERO!" 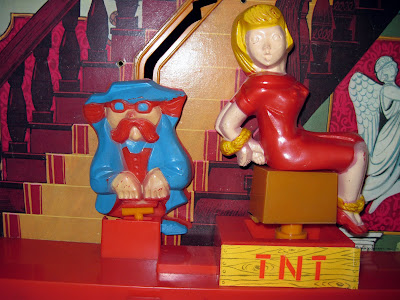 The Master Spy and the girl who needs saving.
Looks she's done for this time...
You can see more pictures of this set, and read the complete, fabulous original instructions, at Sam's Toy Box.
Posted by Tracy at Sunday, May 22, 2011 3 comments:

I couldn't decide what to post this week, so I just took a few pictures of my vintage Fisher Price display case. Let me know if there's anything in there you'd like to see! 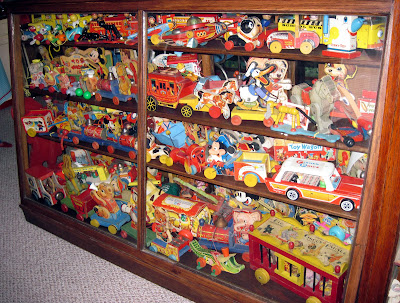 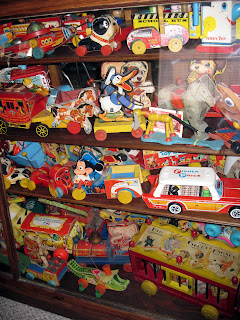 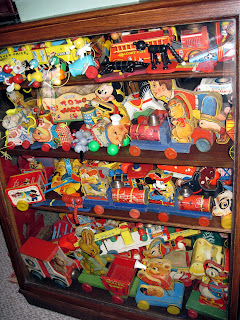 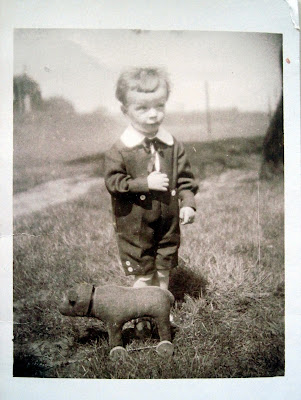 I was besotted with Batman as a child in the 1970s, and really, I guess, it hasn't abated much. Some recent Batman finds:

Batman puzzle, made by Watkins Strathmore and printed by Western Printing and Lithography Company, USA, 1966. Features the Batmobile, Batplane, and an unusual view of the Batcave: 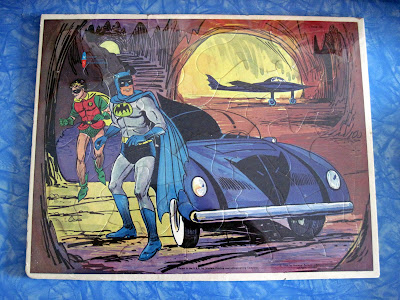 Batman Colorforms, 1966, complete with original booklet. Although the box is pretty tatty, the contents were minty: 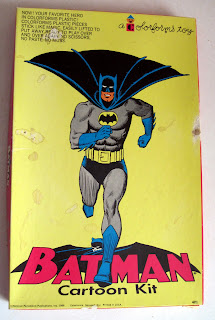 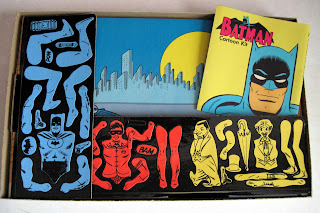 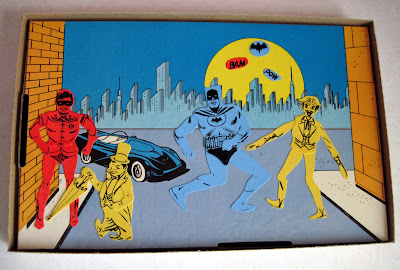 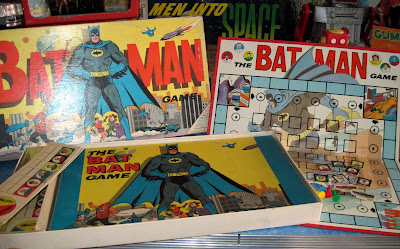 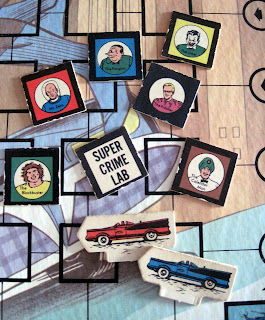 
The cover art is fantastic on the Batman game: 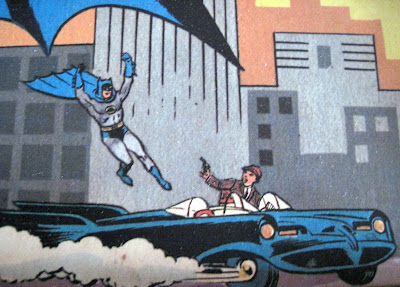 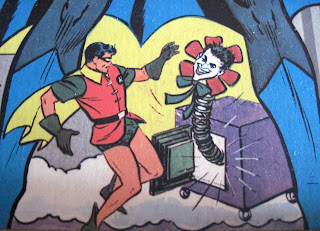 My sweetie found this Barbie for me recently at an antique shop, well-spotted in a case full of dolls. He thought this was "the most beautiful one," and indeed she is lovely, with her flower-child looks and fantastic Mod Era dress. From 1972, Walk Lively Barbie originally came with a platform which made her walk, swing her arms, and turn her head when the platform was pushed. The Mod Era dress from 1970 is called "Loop Scoop," and is one of my favorites from the time period. 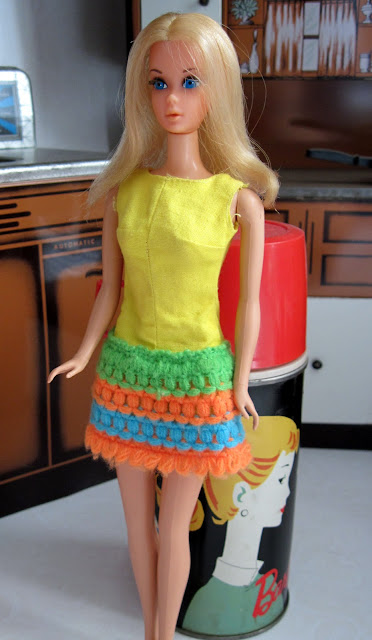 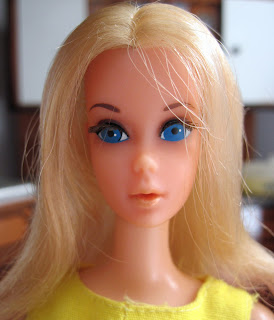