Found in a local antique shop just in time for Halloween, this heavily embossed, die cut skeleton was made in Germany circa 1920, and measures 19 inches tall.

It had long been on my Halloween wish list; I'd only ever seen it in books before. Known as the "waving skeleton," it's much more unusual, and uncommon, than the typical jointed model with posable limbs. 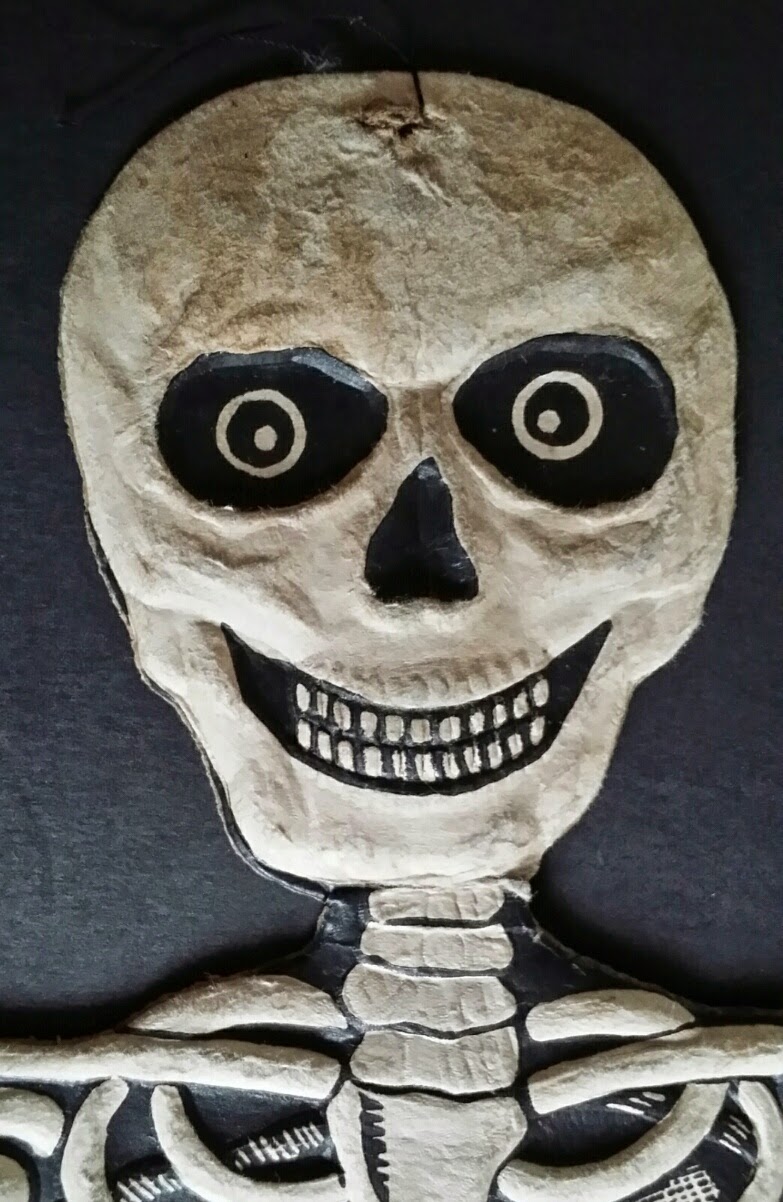 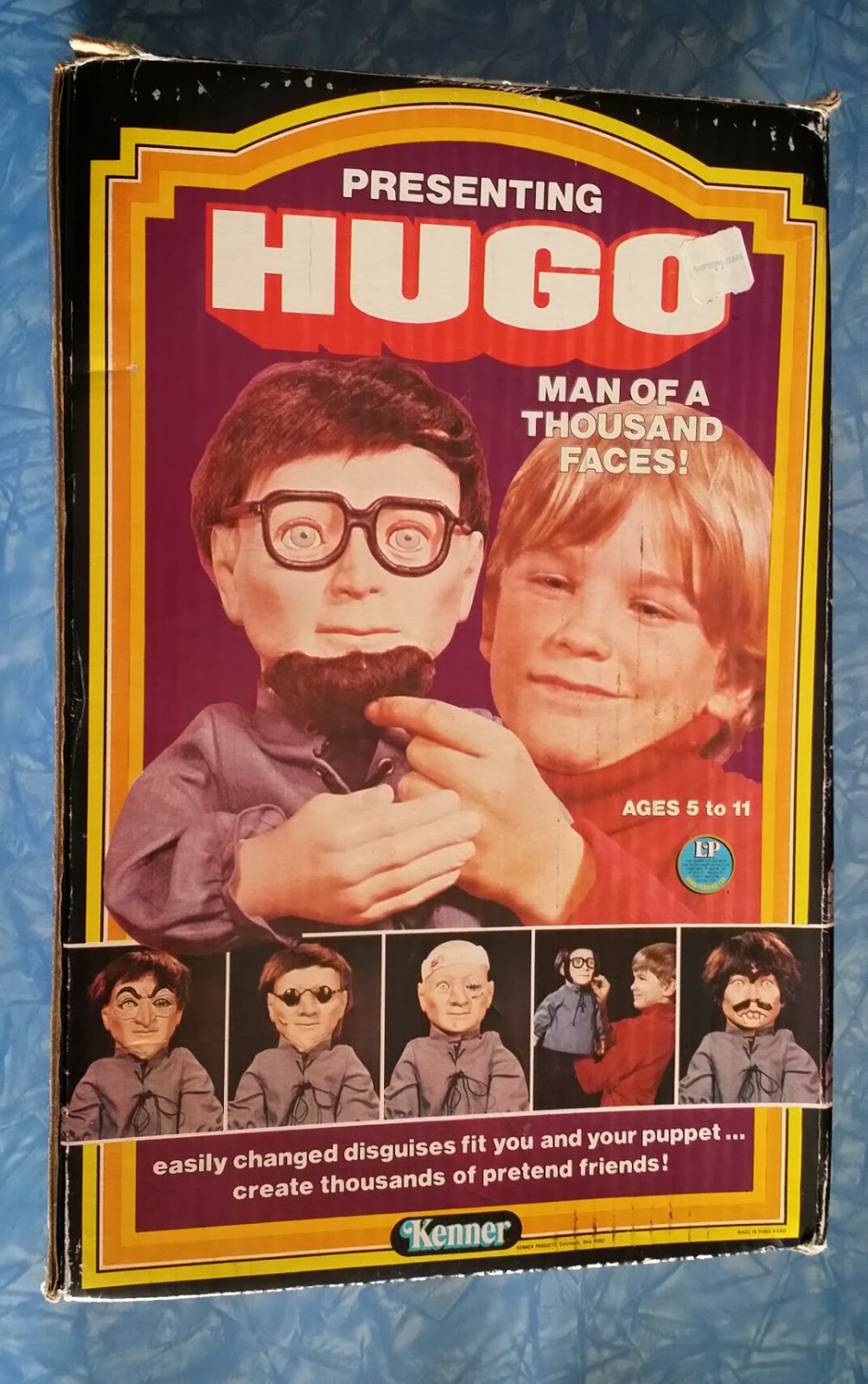 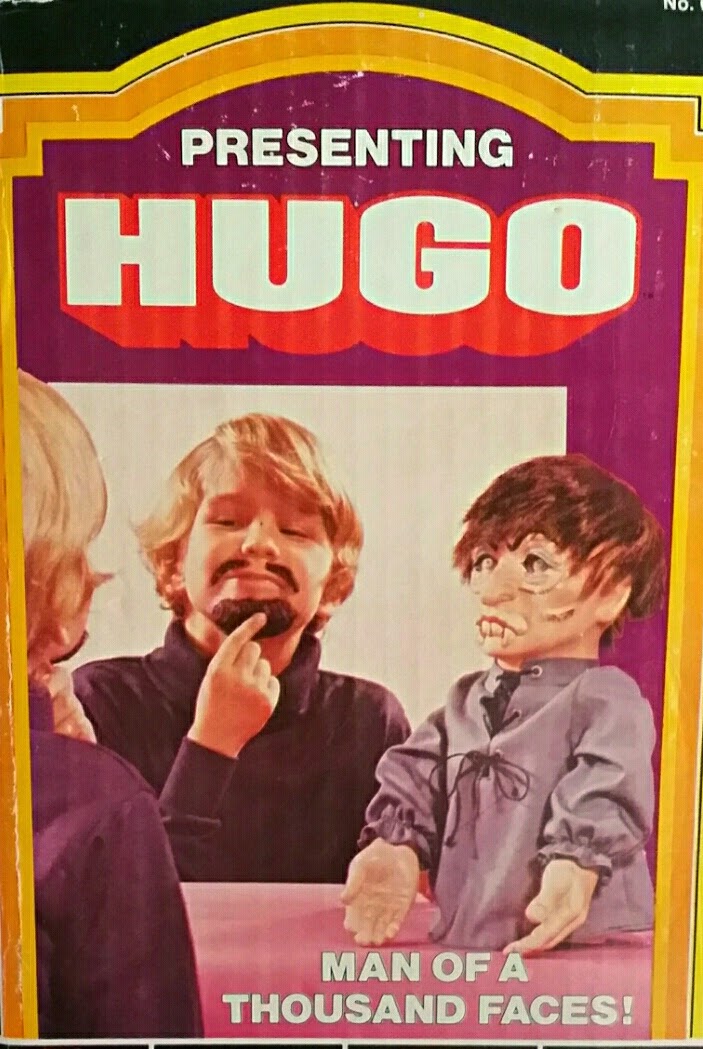 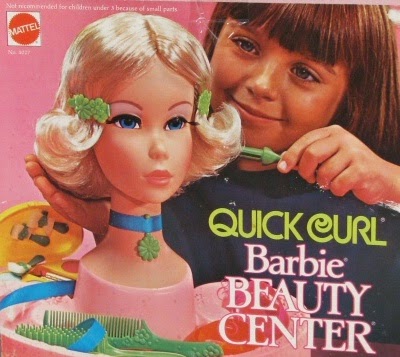 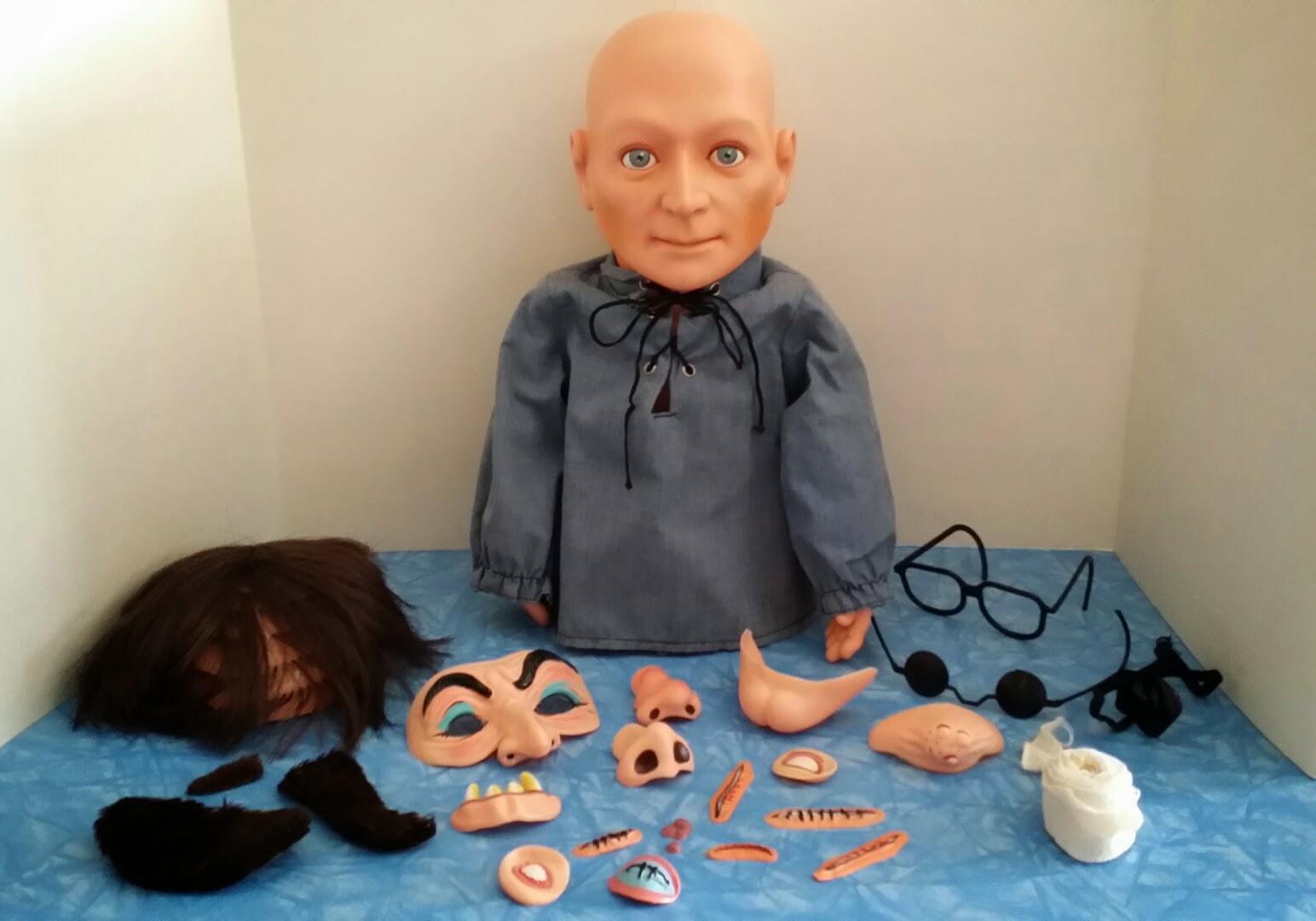 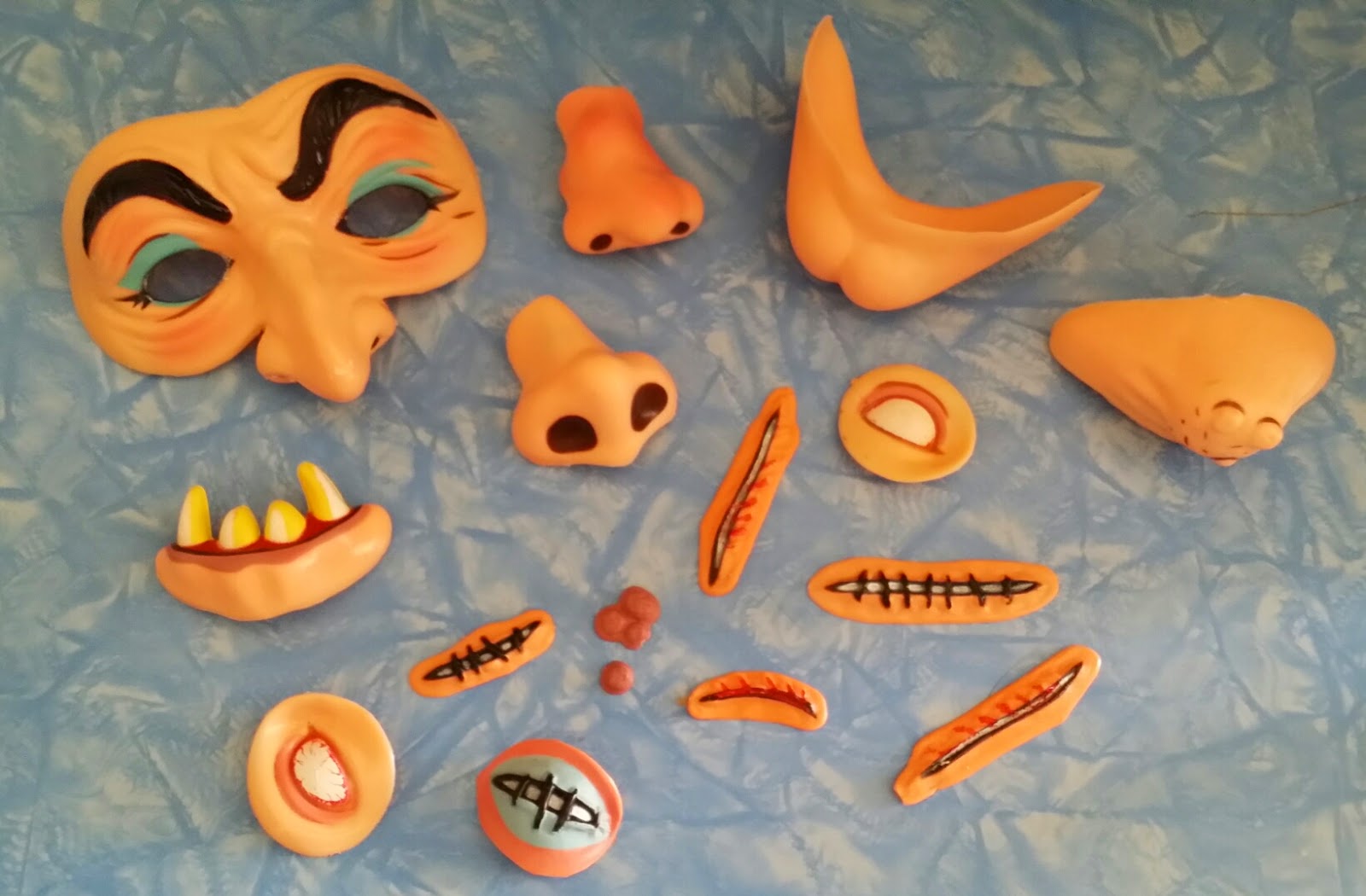 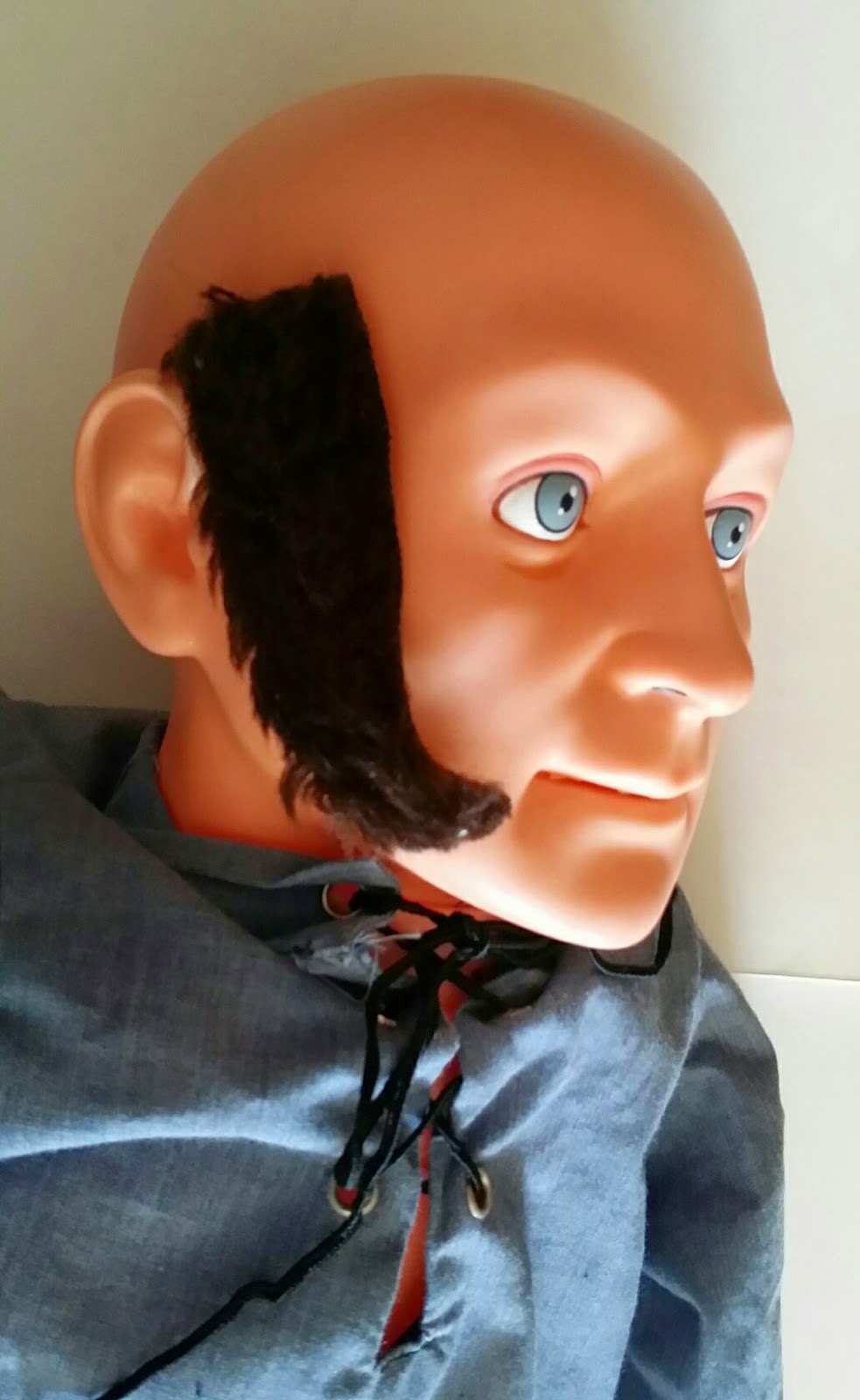 It's nearly Halloween, and so time for a visit with the Addams Family.

These hand puppets were made in 1964 by the Ideal Toy Corporation, and feature molded vinyl heads in the likenesses of the television actors, attached to printed cloth puppet sleeves. 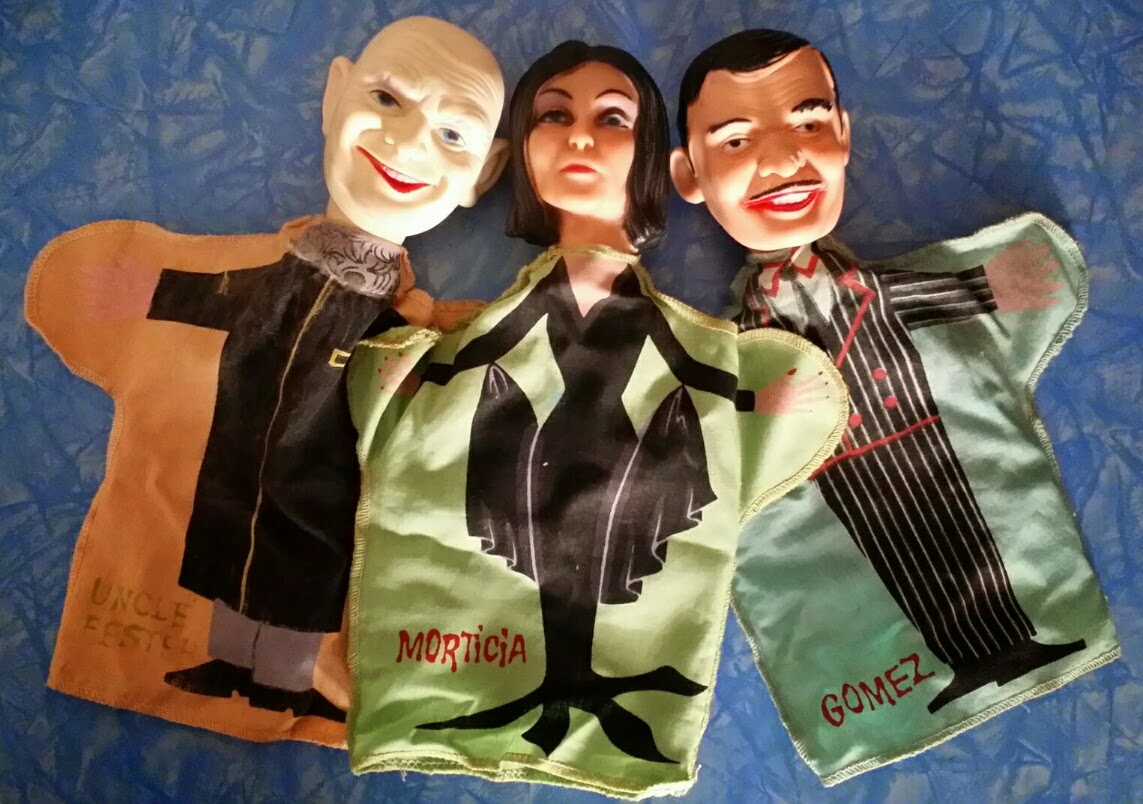 These three characters, Gomez, Morticia, and Uncle Fester, were apparently the only ones produced for this line. Similar puppets were made of characters from the Munsters (but everyone knows the Munsters weren't as cool as the Addamses.)

Classic movie monsters were all the rage in the 1960s, thanks in large part to the showing of Universal's 1930s-40s horror films on television.

At the height of the monster craze, the Colorforms line of playsets, which feature removable vinyl pieces and cardboard backdrop scenes, came out with this fabulous item, the "Glow in the Dark Create a Monster Cartoon Kit." 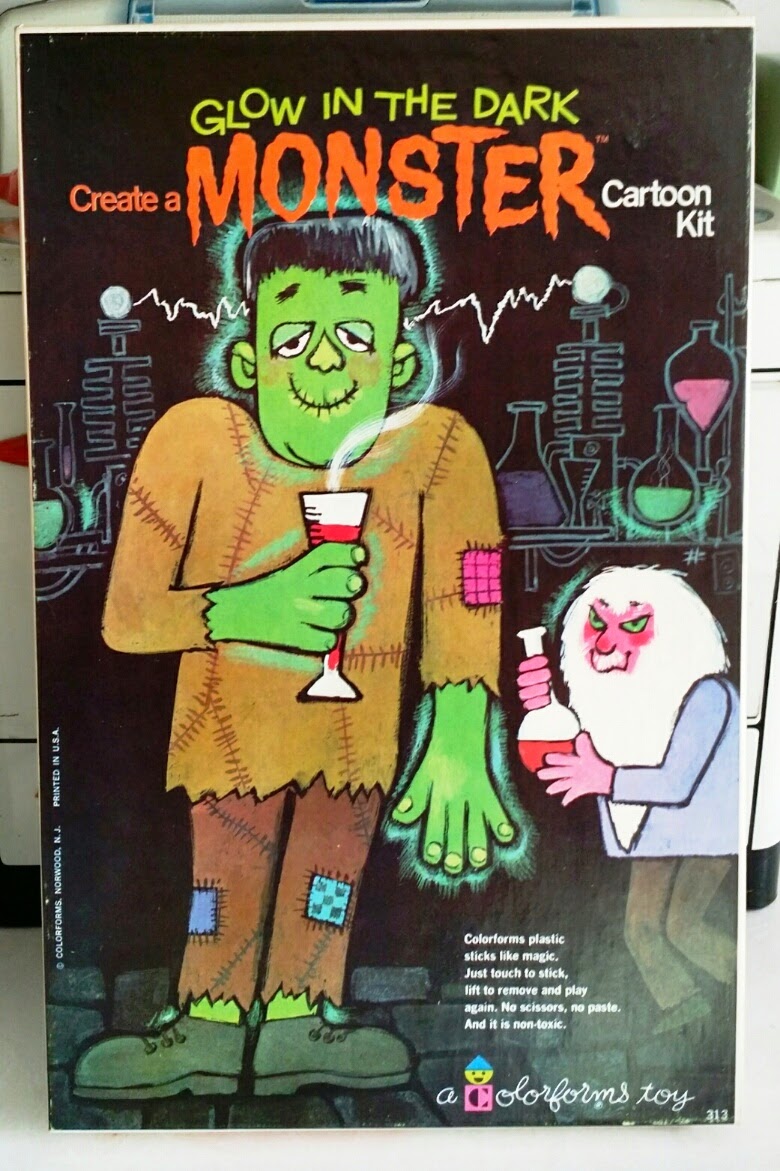 Inside the colorful box are a playboard, two sheets of vinyl character pieces, and an instruction booklet. 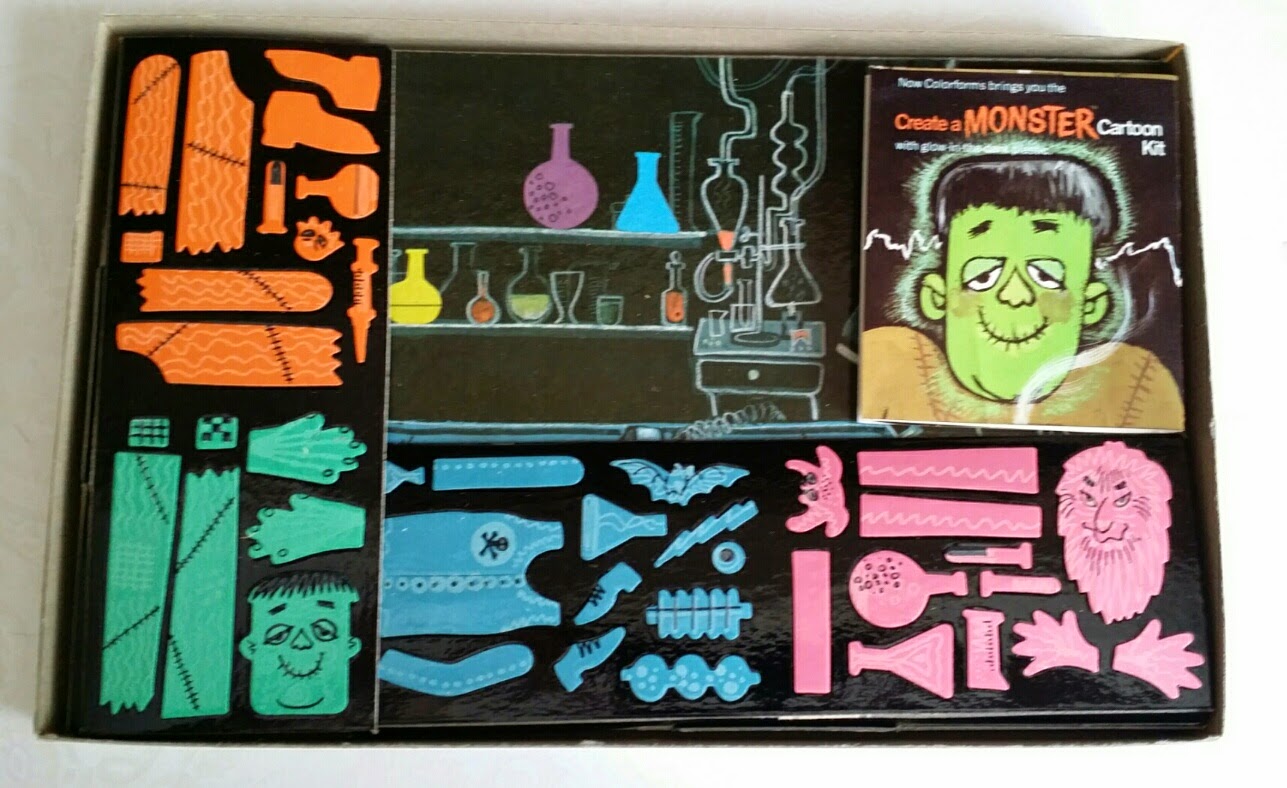 The playboard is a cartoony scene of a mad scientist's laboratory, complete with electrical equipment, beakers and vials, and a slab for the Monster: 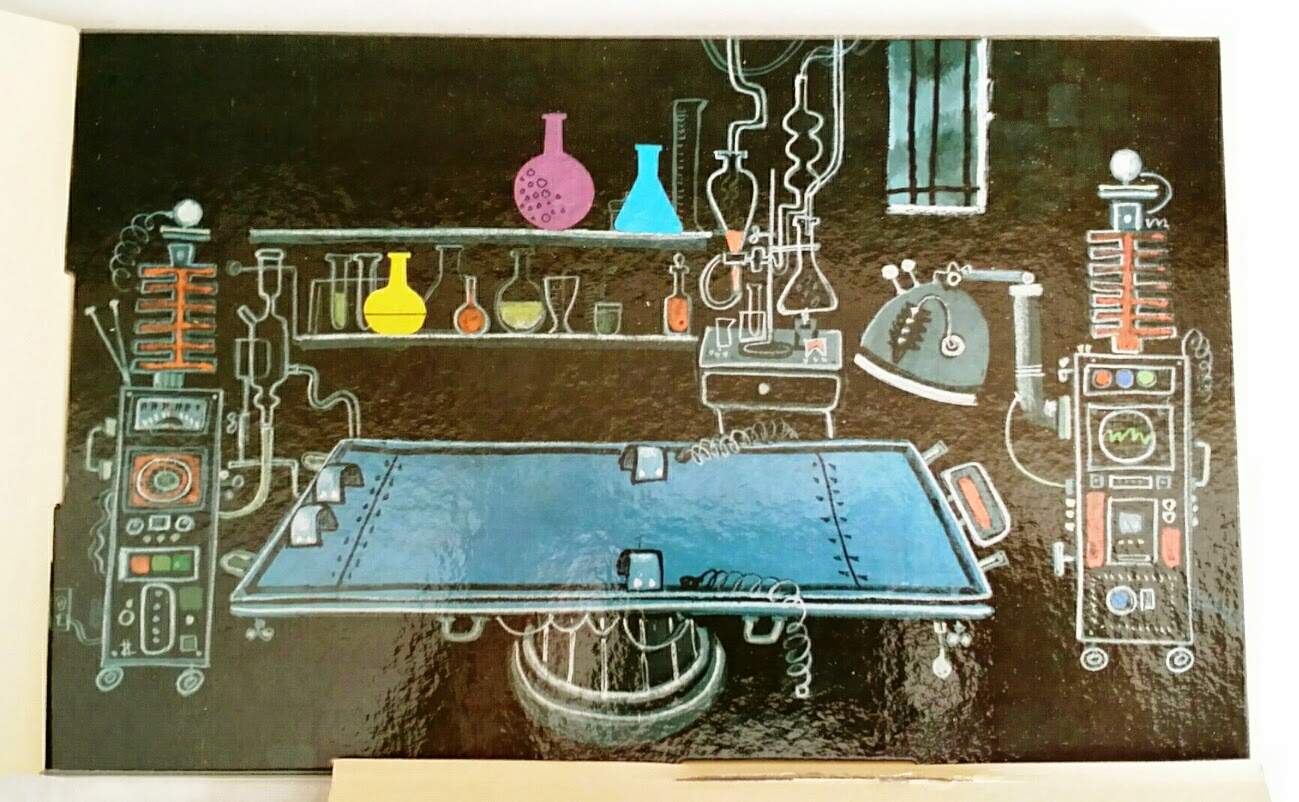 The instruction booklet offers suggestions on setting the scene, and advice for parents on the wholesomeness of the activity set. Colorforms can teach children such skills as finger dexterity, sense of spatial relationships, and size matching, according to the booklet. I expect children could have cared less about those things, and were largely interested in the glow in the dark features.

My set, purchased last year from the collection of a comic book artist, had never been opened, but that is no longer the case. How could anyone resist playing with this fabulous toy?! 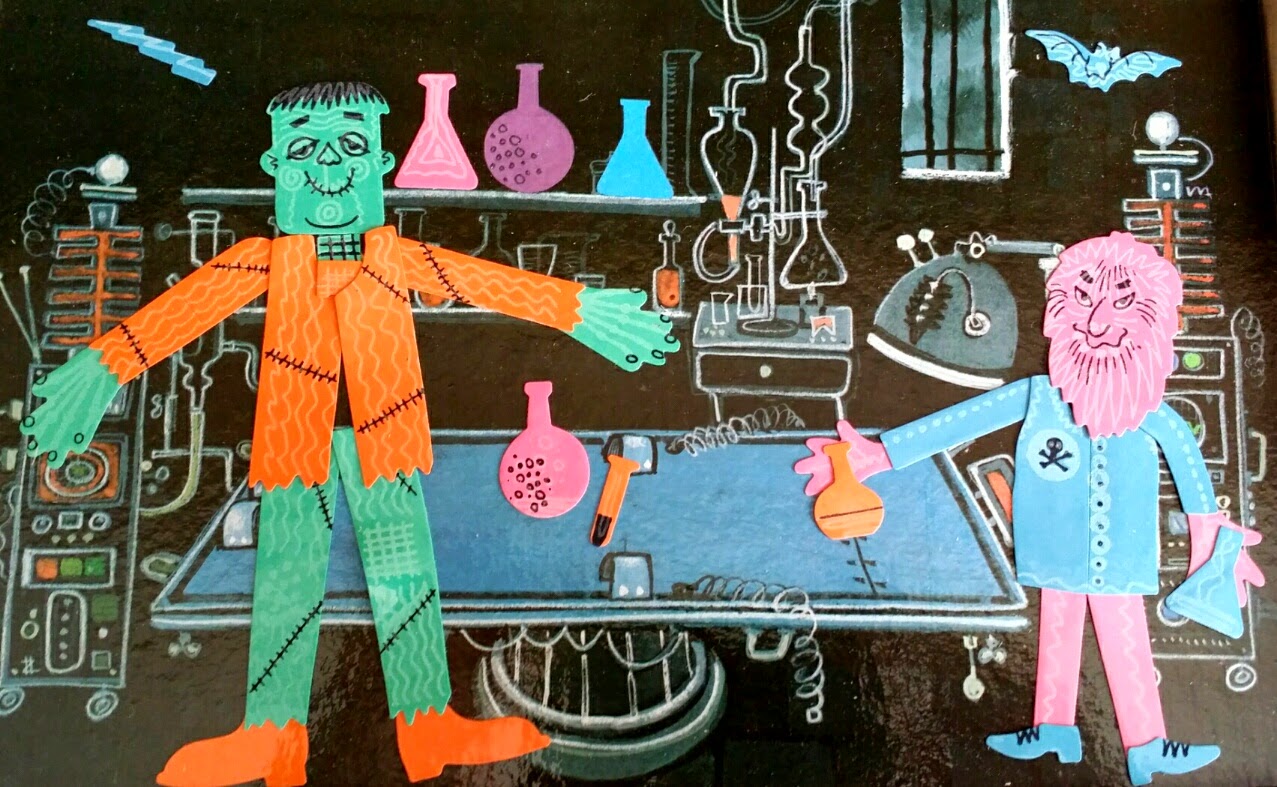 Click here to see another vintage Colorforms monster-themed set, the Castle Dracula Fun House, and here for an Addams Family set.
Posted by Tracy at Sunday, October 12, 2014 No comments:

Every fall I hope to add a piece or two, if I'm lucky on the hunt, to my collection of antique Halloween stuff. This year, I found a wonderful old candy container.

Measuring just under 6 inches tall, this container dates circa the 1930-40s, and features a black robed witch atop a pumpkin. It's made of a pulpy composition type material, like so many of the jack o' lanterns from this time period. 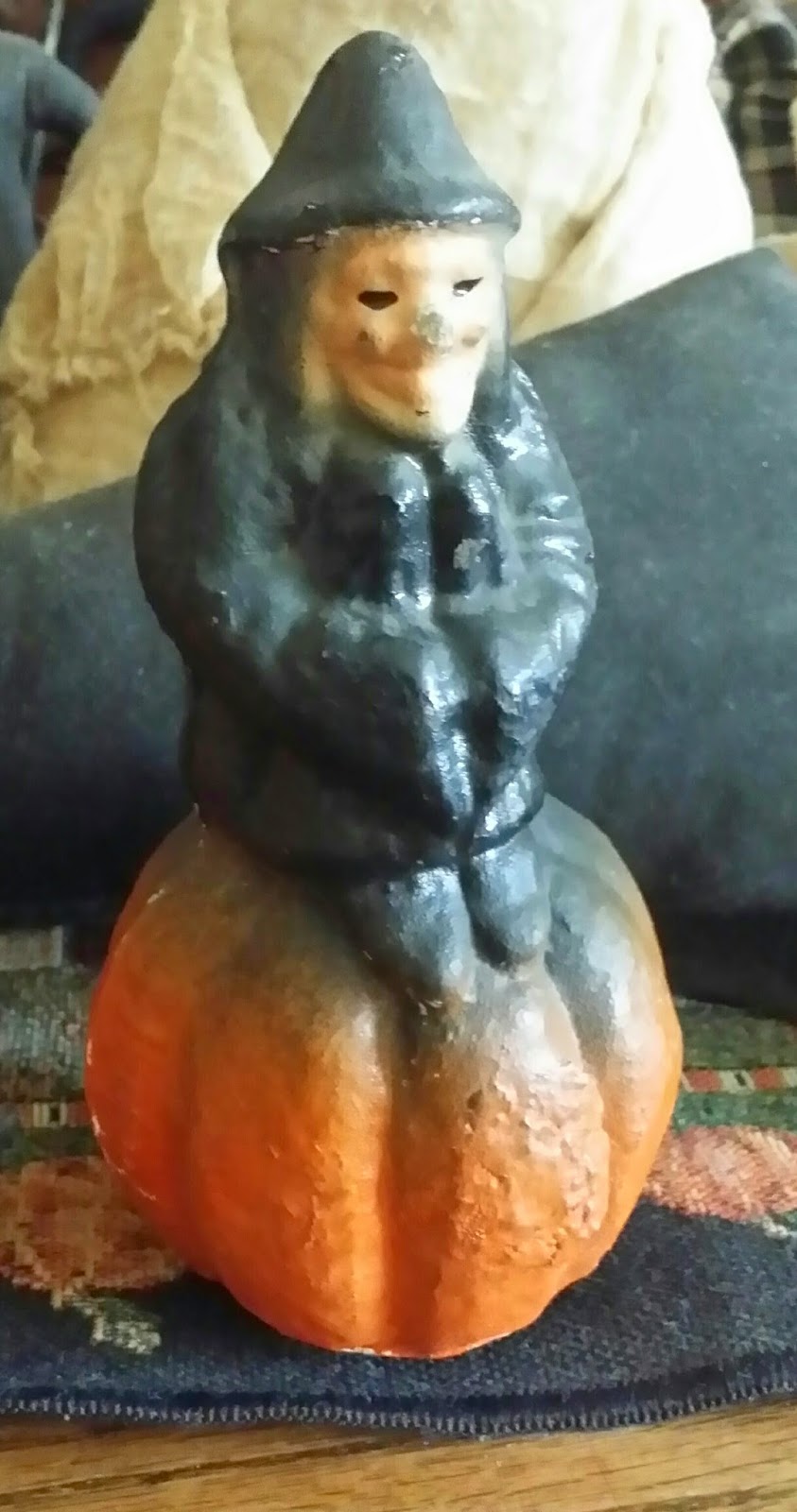 Originally it would have been filled with candy or nuts, and the young owner would have retrieved them by removing this wooden plug on the underside. 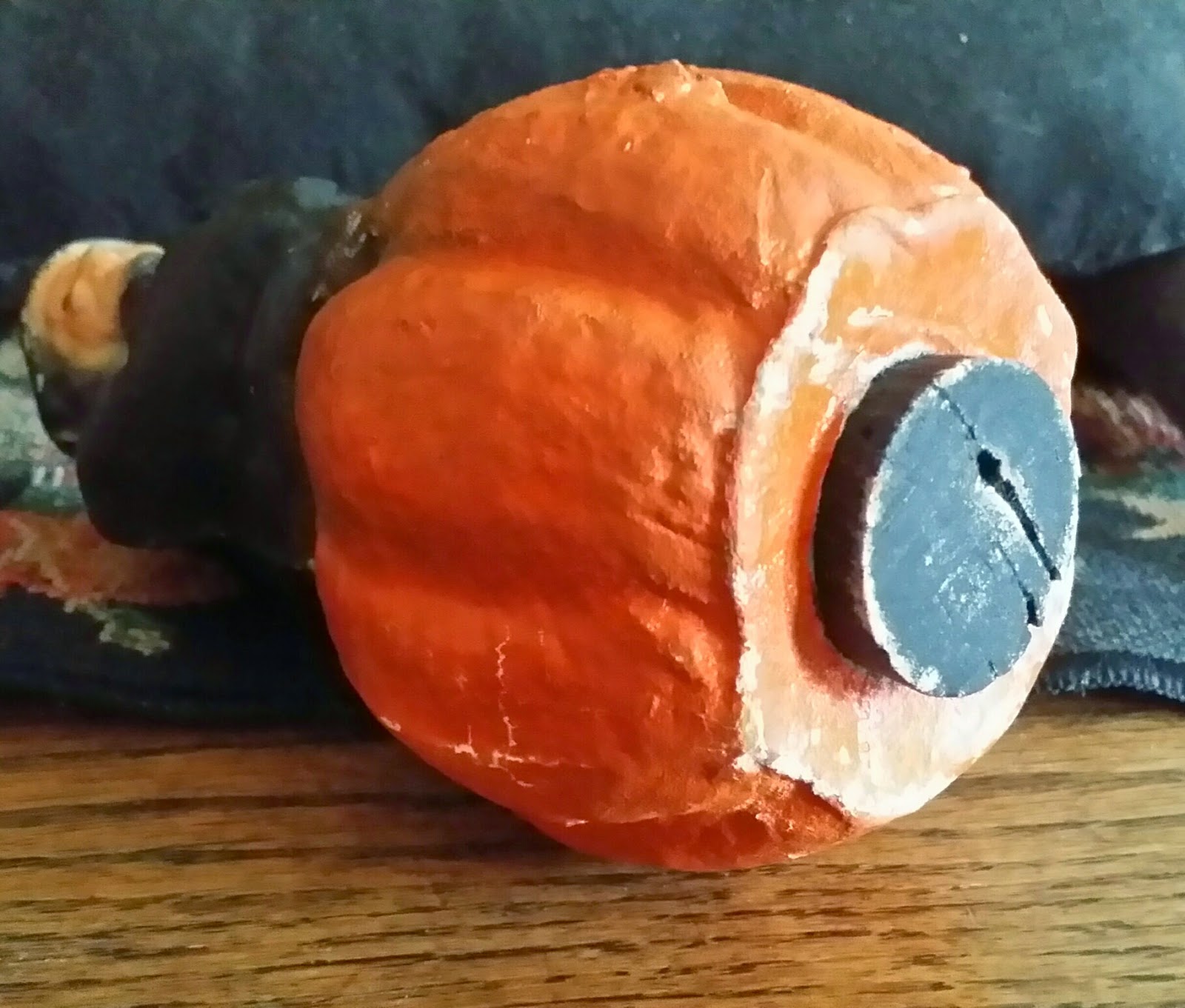 Click here and here to see my other Halloween candy containers.
Posted by Tracy at Thursday, October 09, 2014 2 comments:

Happy October! My favorite holiday will be here soon, so it's time to start posting Halloween stuff.

I'll begin with an antique postcard I found recently. Even though the card is in rough shape, the illustration was an unusual one I hadn't seen before, so it was still worth snapping up, especially as it was only a couple of bucks. 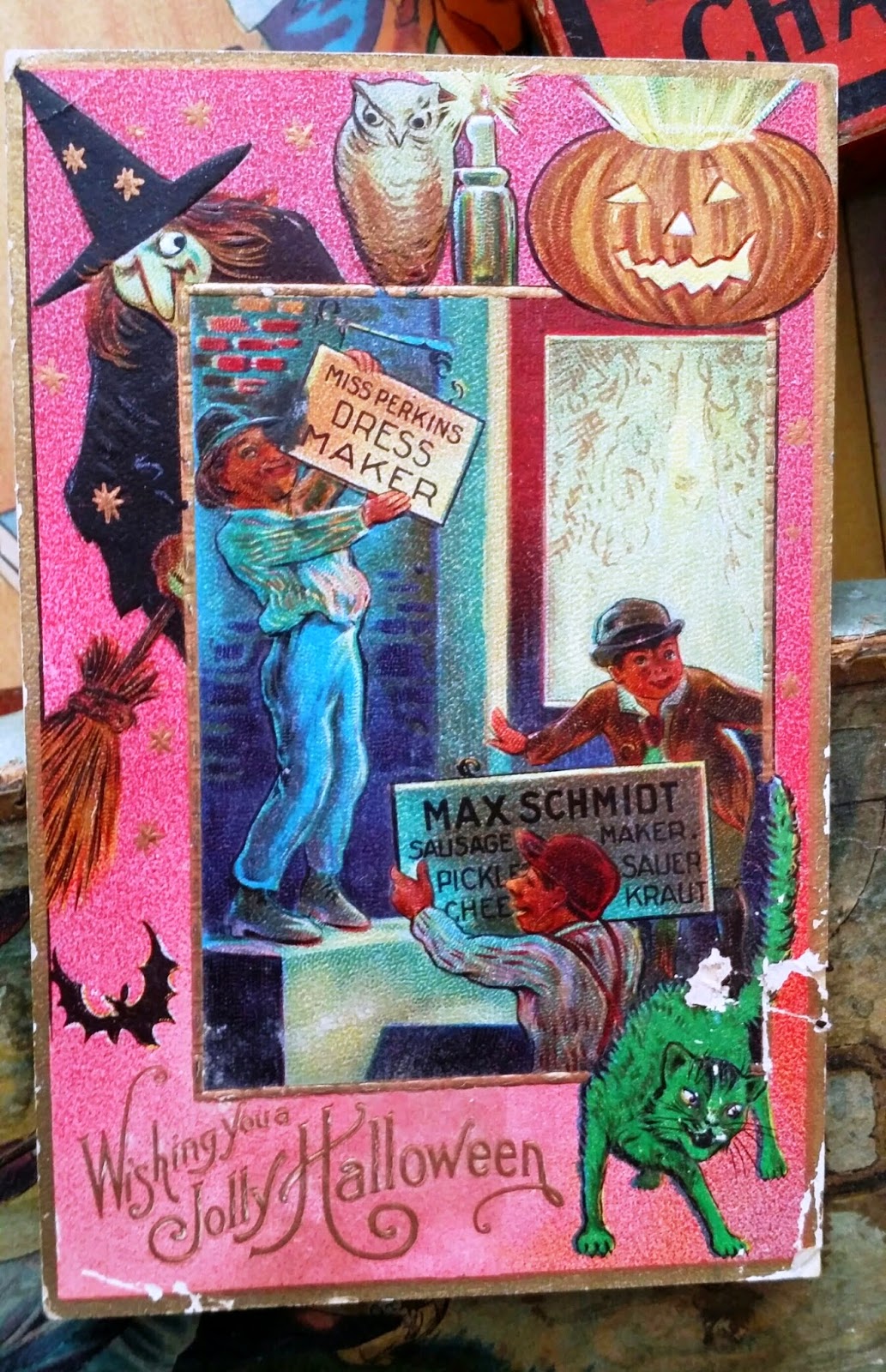 In this little scene, three mischievous boys are engaged in a classic Halloween prank: switching store signs. Here they are replacing a dressmaker's sign with that of a sausage and sauerkraut shop. Imagine the confusion the next morning.

Watch out for pranksters this month! More Halloween and spooky stuff to come.
Posted by Tracy at Monday, October 06, 2014 No comments: