Ooooh, look what I just found: a huge bag of vintage gumball machine prizes, still in their capsules! I lost count at 90 something. Here are a few of my favorite pieces. They all date circa the 1960s - early 1970s, and measure a mere 1 inch tall or less. 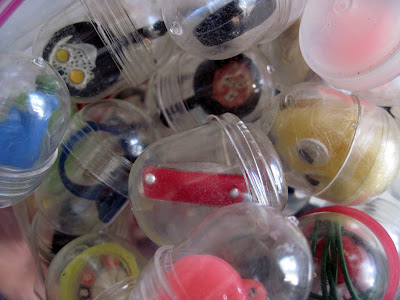 First up is this great and rare movable charm: a tiny church that is hinged and opens to reveal itty bitty people inside: 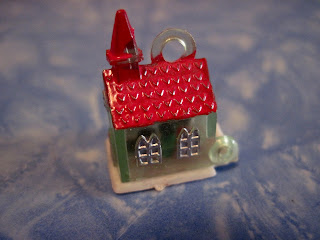 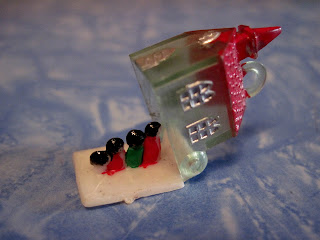 The detail that went into this tiny item, which likely sold for a nickel, is amazing, and the survival of such a small and fragile item over so many years is even more remarkable.

Next, a fun piece: a charm that's a play on words, featuring a "hot dog" (dachshund) on a bun: 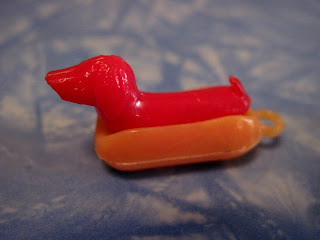 Keeping with the dog theme, the little Scotty below is actually from my own childhood. He originally had a charm loop on his back, but I remember I broke it off because I thought it looked strange. The grown up toy collector in me wishes I could go back and stop my 7 year old self before I did such damage, but at least I still have him. He and his cheesy companion are also movable prizes: the dog's tongue sticks out when you push his tail down, while a mouse slides out of the cheese when it is tipped forward. 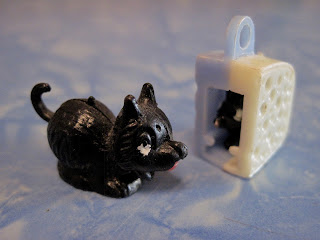 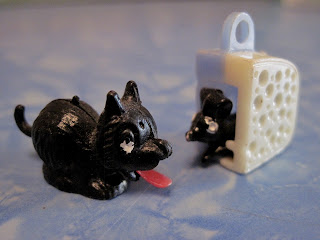 A couple of long lost childhood favorites were spotted in these two capsules. The fuzzy yellow character (probably inspired by the '60s troll craze) has a safety pin glued to his back, so you could attach him wherever you liked. I remember wearing mine on a jean jacket. 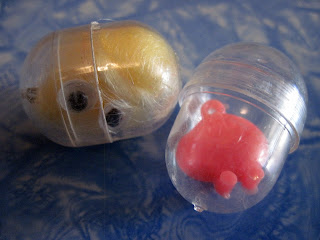 The little pink blobby guy had been one of my treasured tiny toys: I can still vividly recall spotting him in the window of a grocery store vending machine, and feeding dimes into the slot until I finally got one. I kept and carried him around in a pocket for years, until he was, we believe, lost to the vacuum cleaner after being dropped. That was a tragic day indeed, but I was thrilled to find him again in this bag o' treasures.
﻿
Tiny frying pan charms were some of the most common gumball machine prizes in the '60s and '70s, but that doesn't diminish their appeal. There were two varieties: one had stickered food items and the other had molded versions. The difference is apparent in these egg pans: 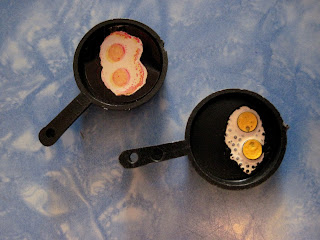 The stickered varieties included the aforementioned eggs, along with bacon and fish. 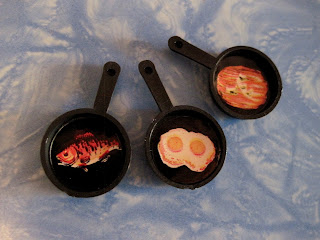 On the theme of eggs, here is another movable charm. This one is a cracked egg, from which a tiny chick emerges: 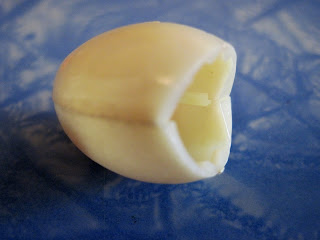 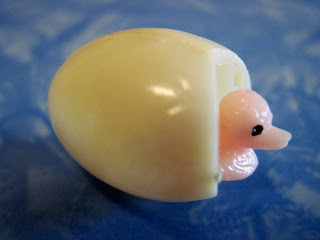 Looking at the very small and easily broken parts of these toys, one is reminded of the toy safety campaigns of the late 1970s. These efforts resulted in the removal from the market of not only such items as these from vending machines and Cracker Jack boxes, but also the demise of the original Fisher Price Little People and Weebles.

This next batch of prizes reflects not only the difference between safety standards now and then, but also ideas of content appropriateness. I call these next items Gumball Prizes of the Crime Syndicate. They include a roulette wheel, a teeny tiny squirt gun, and a fully functional, 1 inch long folding knife with a metal blade (the point is blunted, but still, I think if you were determined enough, you could cause some damage with it.) They're everything the aspiring 7 year old criminal needed to start his own illegal gambling operation or enforcement racket. 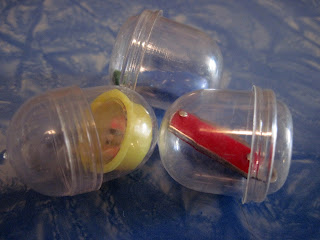 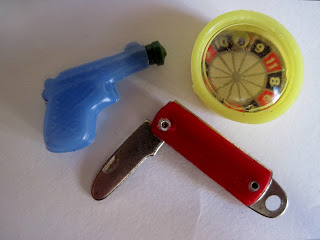 This ends our tour of the giant bag 'o gumball machine prizes for now. Hope you enjoyed it! 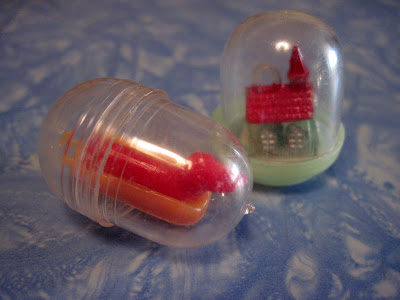 Mr. Potato Head on the Moon

The year was 1968. The United States was in the midst of its space race, as engineers and scientists worked feverishly to send the first man to the moon. At the same time, toy designers at Hasbro worked just as feverishly to come up with new ideas for their hit toy line, Mr. Potato Head. The result was Mr. Potato Head on the Moon, a clever set in a gorgeously illustrated box that allowed children "to change fruits and vegetables into spaceships, astronauts, or moon people!" 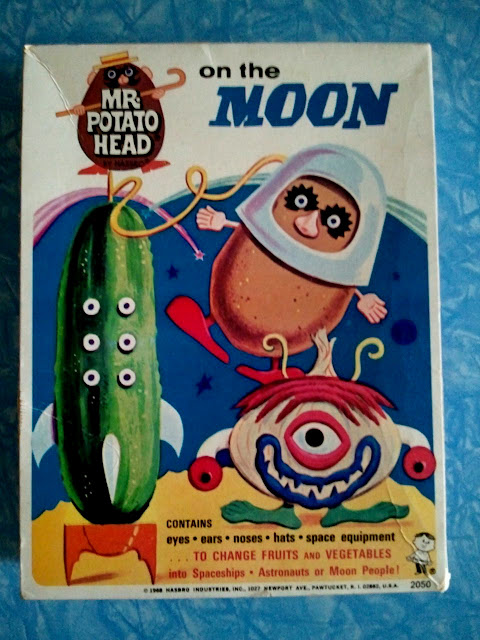 Inside the box was a huge assortment of pieces unique to this set, including a space helmet; alien feet, antennae, fanged mouths, giant eyes, and various other appendages; and spaceship parts. This set was meant to be used with real fruits and vegetables, and did not include a plastic potato. The instructions suggested using a cucumber for the spaceship, an onion (!) for the alien, and a potato for the astronaut. 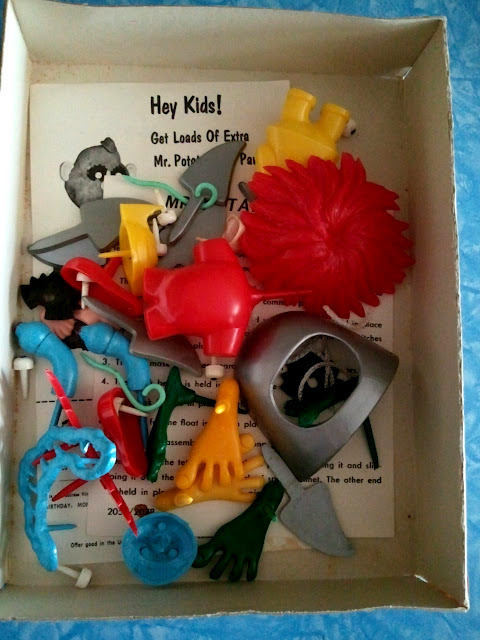 Mr. Potato Head on the Moon is now one of the rarest and most valuable of the vintage sets, and was long considered a Holy Grail of sorts for Potato collectors. In a quirky bit of cosmic coincidence, I finally found mine just a few days ago, around the time of the recent Blue Moon!