Several people have asked for contact information for the artist who made the ghost, witch, and bat dolls I posted this month. Her name is Jane Rieser, and her email is: sweetjane(at)wowway(dot)com. (Of course, replace (at) with @, (dot) with . ) She's got some amazing Santas underway right now...
Posted by Tracy at Monday, October 31, 2011 No comments:

This wacky wee bat, 7 inches tall,
was another of this season's creations
by one of my favorite primitive doll artists. 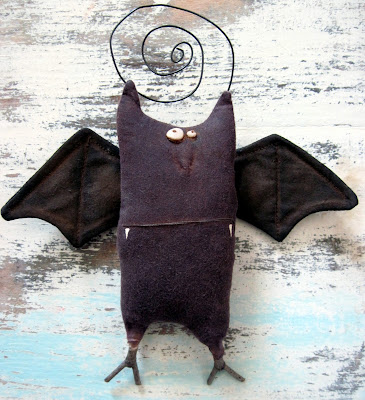 Have a happy Halloween! Watch out for bats.
Posted by Tracy at Sunday, October 30, 2011 1 comment:

The second of two different board games based on the popular television show, Barnabas Collins Dark Shadows Game was released in 1969. Aside from the artwork, the game really has little to do with the character or program; it's basically a variation of Hangman played with plastic skeletons. But it's still super-cool. 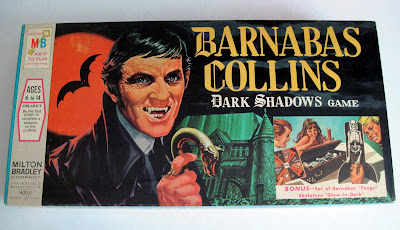 Players spin to get the bones they need to complete their skeleton, complete with its own scaffold. The bones are kept in a plastic and cardboard coffin with the name "Barnabas Collins" engraved on the lid. Also in the coffin are a number of wooden stakes. If your spin lands on a stake, it's not good: once you have three stakes, you have to return a bone. First player to finish their skeleton wins, and gets to wear the included (but almost always missing) "Barnabas Collins vampire fangs." (Hopefully they were washed between games.) 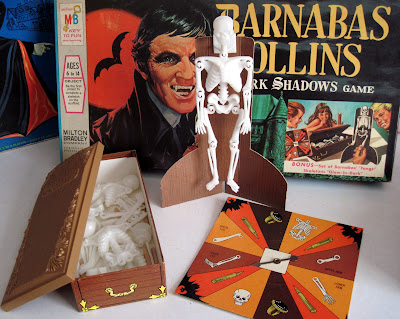 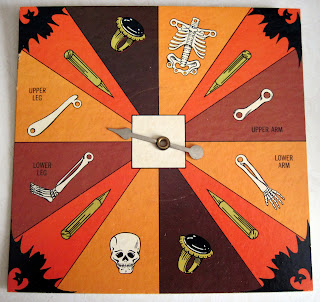 The spinner. Watch out for those stakes. 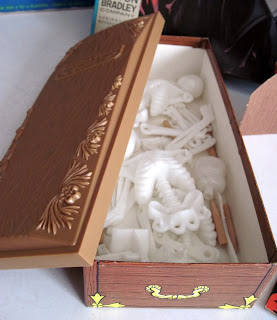 The coffin full of bones (and stakes). 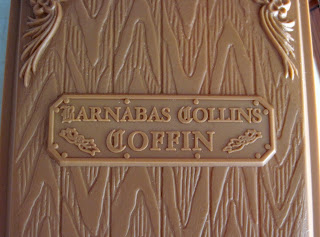 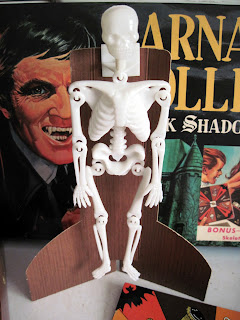 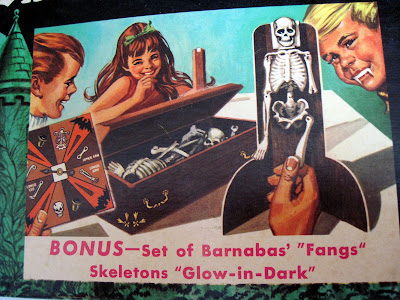 And, as if it's not already fabulous enough that Barnabas fangs are the prize, they also glow in the dark! And so do the skeletons. Awesome.

Dark Shadows, the 1960s supernatural soap opera, spun off a couple of vampire themed board games. This one is by Whitman, and dates from 1968. 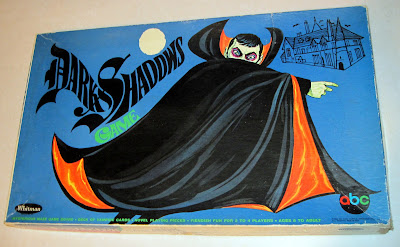 Illustrations of Barnabas Collins and Collinwood mansion
feature on the box cover.
The "board" is actually a giant paper mat, and consequently rather fragile. A simple track runs though representations of Collinwood and its grounds. 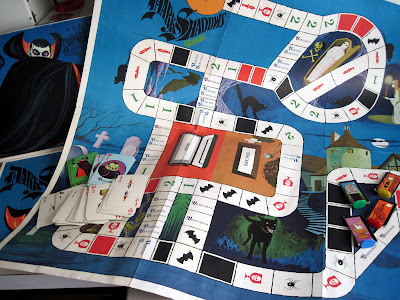 Players select a pawn (a gravestone, howling wolf, drippy candle, or grandfather clock about to strike midnight). Cards direct their movement along the track, and the first one to the finish wins. 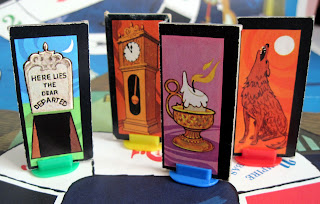 I'm guessing most kids would have wanted to be the wolf,
as opposed to being a candle... 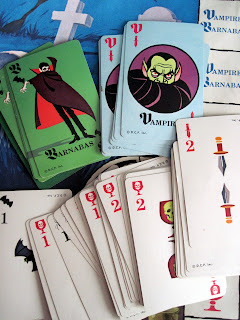 The draw and discard piles on the board are an empty coffin and an open grave, respectively. 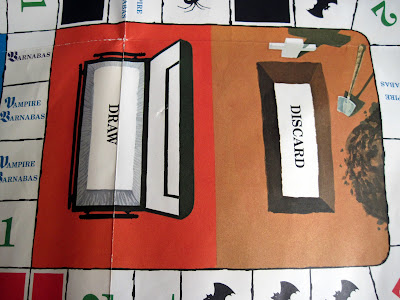 For all its spooky cool art, one would expect this to be an exciting game to play, but sadly it's rather dull, just a straightforward track. The other Dark Shadows game is anything but boring though, and it's coming up tomorrow.
Posted by Tracy at Tuesday, October 25, 2011 3 comments:

Another Halloween doll by one of my favorite primitive artists, this quirky 16 inch witch flies through the cornstalks on her twig broom. 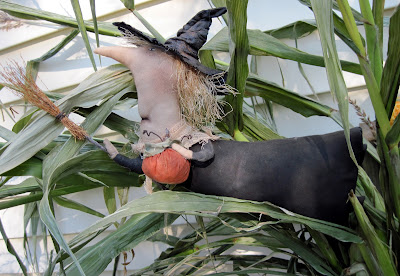 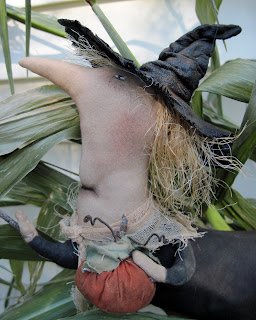 Her funny face is worth a closeup, I think. Isn't it fabulously freaky?
Posted by Tracy at Thursday, October 20, 2011 4 comments:

Each October, one of my favorite primitive doll artists makes another batch of fantastic Halloween pieces. This hand sewn and delicately aged muslin ghost just drifted in. He holds a rusty old key; perhaps it unlocks the tomb behind him. 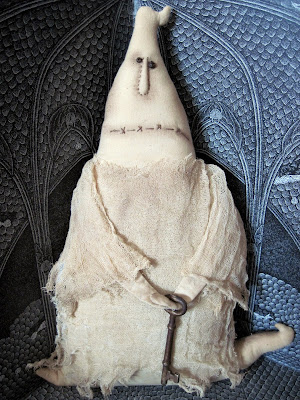 Bigfoot, he of the infamous giant footprints, scored his own board game in 1977. A scarce find today, it's one of my favorite monster themed games. 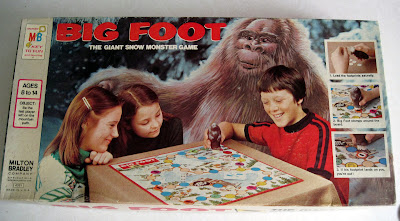 If this Bigfoot was meant to look friendly, the artist really missed the mark. He is clearly considering eating these children. 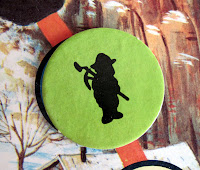 Players select pawns, which appear to be mountaineers, explorers, or possibly Bigfoot hunters. 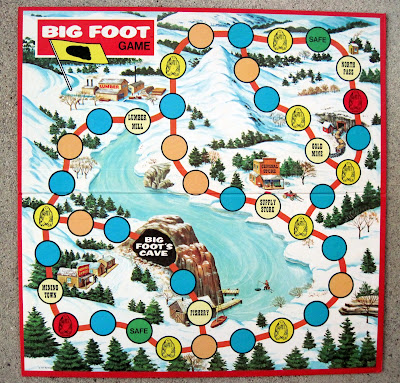 The pawns are moved according to the roll of the dice, but if they land on a Bigfoot space, a subsequent roll moves the monster, a hefty plastic figure, along the track: 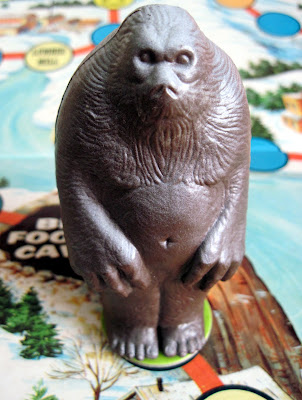 As Bigfoot crosses or lands on a pawn, he dispenses a disk, which may or may not bear a footprint. If the print appears, that pawn is out of the game. Last player left unstepped upon wins! 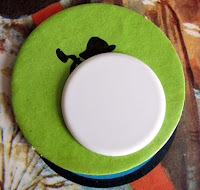 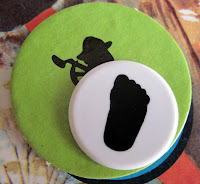 
To learn more about Bigfoot, or possibly to report a sighting of your own, contact the Bigfoot Field Researchers Organization. (Oh yes: there really is one!)
Posted by Tracy at Wednesday, October 12, 2011 9 comments:

Just in time for Halloween came my latest Peng Peng bear: Mr. Eightball, 4 inches of hand-dyed black licorice colored mohair, green glass eyes, and mischievous grin. (I added the tiny vintage jack o' lantern, and made the hat and bow tie...can you tell the hat was once the thumb of my left glove?) 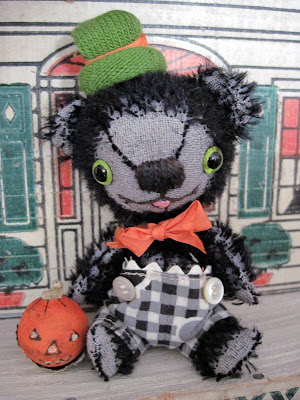 Mr. Eightball and Jack hang out on the front porch.
Posted by Tracy at Saturday, October 08, 2011 3 comments: 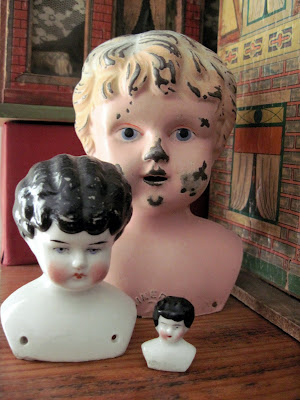 I got this last December, and have been waiting all year to post it. (My family has grown used to me asking for antique Halloween stuff for Christmas...)

This pumpkin bodied witch, 6 inches tall, is a candy container. The base opens, revealing a space inside that could be filled with small candies. Made in Germany circa the 1920s. 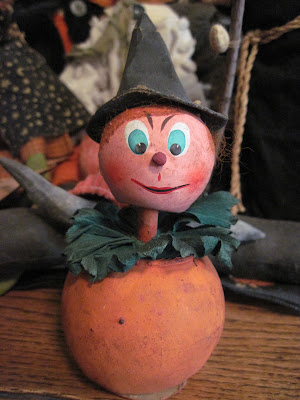 Coming up in October...

My favorite month of the year is here: Halloween...I mean, October. Actually, I like Halloween so much, I keep one room decorated that way all year. It's my happy place.

Coming up this month: old Halloween decorations, spooky dolls, and some vintage monster and horror themed board games. 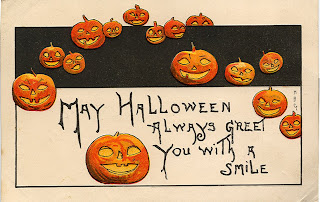