Found in a local antique shop just in time for Easter was this egg. An old but rather nondescript egg made of red stained pressed paper, it measures about 4 1/4 inches tall, and has a cord at the top so it can be hung as a decoration.


Upon closer inspection, a seam was revealed along the side, and when the egg was opened, toy treasures were discovered within, still sewn down to their original backing cards. 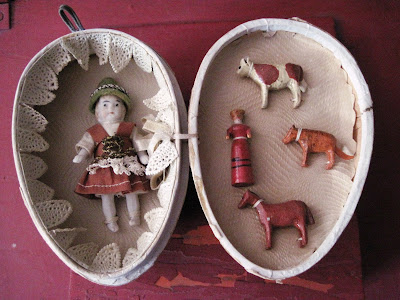 The little bisque doll is a mere 2 1/2 inches tall, and lies nestled in a bed of paper lace. On the other side of the egg, a set of four carved wooden Erzgebirge toy figures wait to be played with. 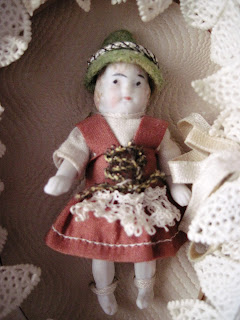 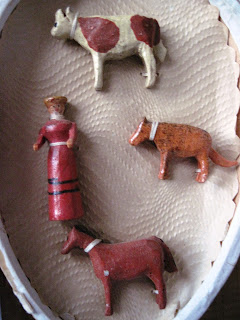 These toy filled eggs were made in Germany from the late 1800s up to about 1920. They were popular in France as Easter gifts, and were exported there in great quantities. Few remain today however, since the pressed paper was fragile, and children naturally would have removed the toys as soon as they opened the eggs.

When they are found today it is usually as unsold stock that never made it into children's hands, and such eggs typically have the toys still sewn in place, as with this example. These eggs usually had a jointed bisque doll on one side, and tiny toys, doll clothes, or doll accessories on the other. The toys inside varied in quality from the very fancy to the rather primitive, enabling parents with a wide range of budgets to purchase them for their children's Easter baskets.

Keep an eye out for eggs today! Happy Easter!

One of the greatest space toy lines of all time was created by the Archer Plastics Company of New York in 1952. Founded by a tool and die maker and mechanical engineer named Bob Genin, Archer Plastics designed fantastic space men, rocket cars, and space port playsets that have an Art Deco and Streamline Moderne sensibility about them. While we admire these toys today for their artistic quality, children back in the 1950s simply loved them for the imaginative possibilities they presented.

I've posted before about my Archer Space Men, including a complete set still in its original store counter display box. But the pinnacle of the Archer space toys, its tin litho Space Port from the Outer Space Set, eluded me...until recently. Presenting the finest tin litho space playset ever created, now residing happily on my dining room table after a brutal eBay battle: 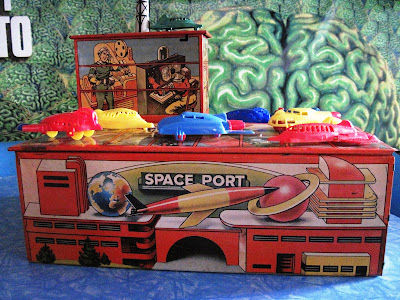 The Space Port is made of lithographed tin, and measures 15 inches wide. It includes a control tower with an antenna and radar dish, and originally came boxed with a space car, a handful of space men, and a plastic rocket just like the one depicted on the front panel. The rocket cars and space ships now parked atop the port are not original to this set, but were made in the same time period and are perfectly at home. There were many tin litho space port playsets produced by various companies in the 1950s, but the Archer set stands out because of its artwork. The Deco and Moderne inspired buildings look architecturally plausible, somehow familiar and yet futuristic. It is the space men populating the port, however, that are really remarkable. Fully realized characters, they have tremendous expression, and appear to be part of a story that the viewer is expected to piece together. All in all, the art creates a great springboard for the imaginations of the children who first saw it over 60 years ago. Let's take a closer look.

Here are some views of the tower, where space traffic controllers appear to be hard at work, directing takeoffs and landings to and from distant worlds. 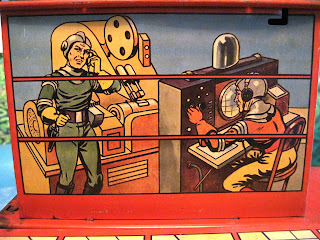 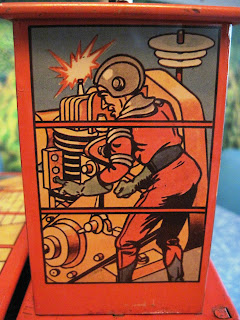 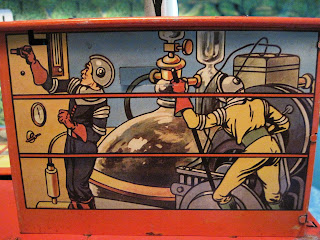 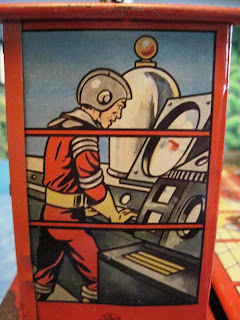 Looking down at the Space Port from above, you can see into the rocket bay, where mechanics are busily preparing a ship for launch. (You're not really looking "into" anything: this is just a particularly effective illustration on the flat tin surface.) 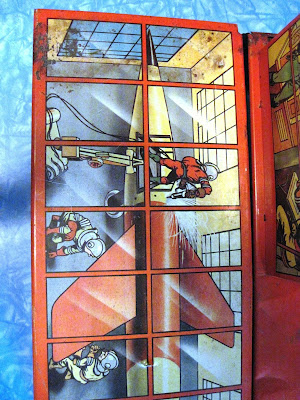 This panel lifts up, revealing a rocket gantry that the plastic ship could be "launched" from. This is the only moving feature of the playset; the rest is powered purely by imagination. 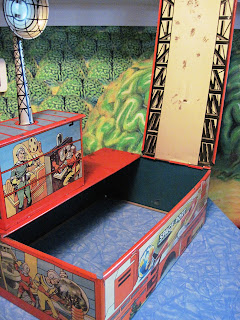 Since my playset is missing its original Archer rocket (a common state of affairs, as the rockets were invariably taken away for outdoor play, lost off rooftops, etc.) I've added a fleet of space ships made in the 1950s by companies like Premier and Gilmark. These vehicles are fascinating for the way in which their design influences, the futuristic automobiles of the late 1940s and early 1950s, can sometimes be seen. Look closely and you'll see what appears to be the cab of a 1940s sedan melded to side rockets in the blue spaceships, for example. 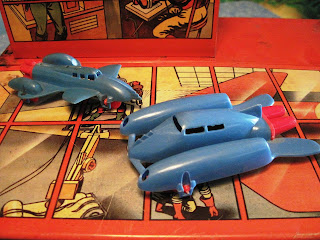 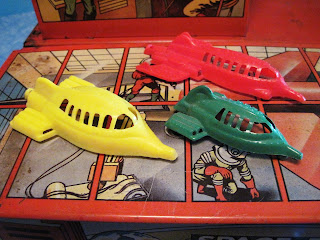 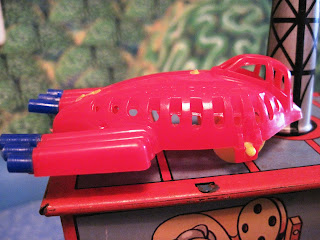 On the Space Port's side panels, workers can be seen laboring at fantastic machinery which keeps the station running.

On the back panel, three space men are having a conversation in front of a large viewing window. Two of the space men appear angry, while the third bows his head in resignation. Perhaps the report he has in his hand (interestingly, on a paper scroll) describes how his department is behind schedule or over budget. 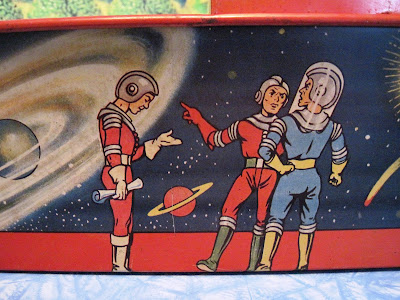 The characters in the Space Port's artwork are clearly modelled on the original Archer space figures. Here, you can see a figure next to his one-dimensional counterpart, wearing the same helmet and suit. 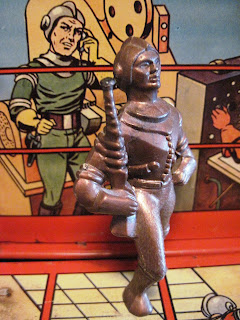 Welcome back to Playtown: I've posted before about this line of miniature shops and accessories made in New York from the 1940s - 1950s. The sets ranged from a small, simple grocery store to a deluxe diner called the Playtown Luncheonette, while other items included a bakery and a meat market. Sold separately, together they made up a miniature municipality able to meet the shopping and dining needs of most small doll and teddy bear inhabitants.

The Playtown pieces have a devoted fan base, spurred both by nostalgia and the considerable charm of the toys' design.

Here's the luncheonette, which I found unplayed with in its original box, its accessories still sealed in a brittle cellophane bag. (Which is not the case any longer...) 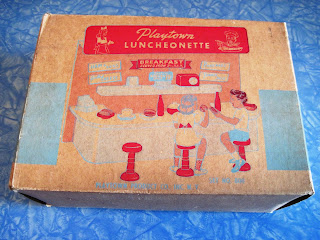 The luncheonette measures 10 inches wide by 6 high, and came packed in this cardboard box. 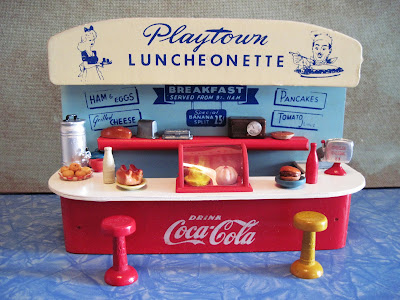 The diner came with wooden stools, bowls, plates, cups, and bottles; an assortment of plaster food items; a plastic Renwal radio; and metal accessories including a cash register, toaster, and waffle iron. I added the pastry case, coffee pot, soda dispenser, and plate of donuts (a diner has to have donuts.) 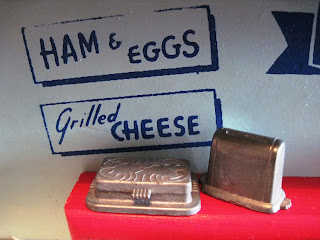 The diner features very authentic stencilled signage advertising its specials, including grilled cheese, pancakes, and a banana split (only 25 cents!) along with very vintage images of a waitress and chef. The Coca-Cola logo is original to the luncheonette, and makes this Playtown set also sought by Coke collectors. 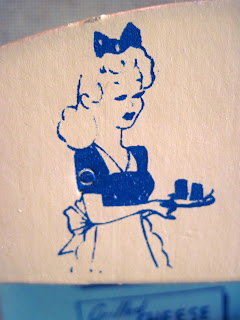 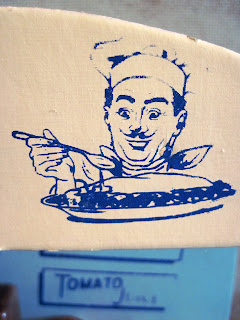 The plastic Renwal radio is the same one used in dollhouses of the period.


What's to eat? Hot dogs and hamburgers, of course! These examples are of molded and painted plaster. 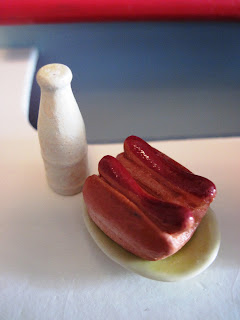 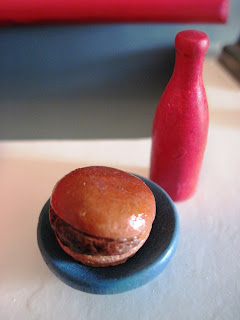 The plaster desserts in the display case are also original to the set, but a bit mystifying. Are they Jellos? Cakes? A Jello and a cake? I suspect the yellow one on the left may be an apple dumpling. 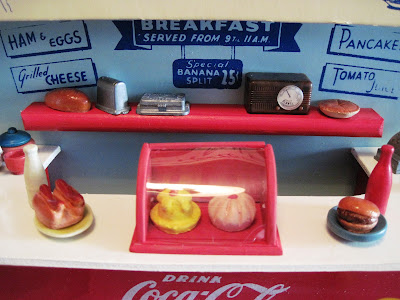 While the Playtown shops are fantastic toys on their own, and loads of fun to set up and accessorize, they also make great display props for miniature dolls and bears. The little dolls made in this same era by the Flagg company are perfectly sized to staff the luncheonette. 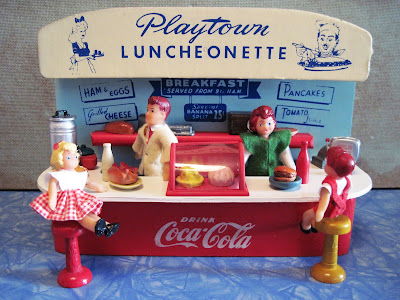 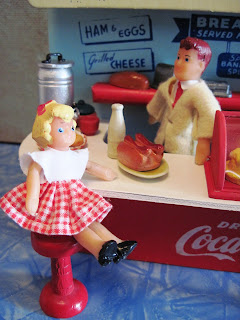 Bears get hungry too. This miniature Steiff is just the right height to eye the pastry case. 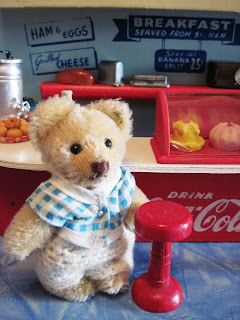