Part of a collection of vintage German and British Potato Heads I recently purchased, this boxed version was made in England by Peter Pan Toys in 1974. Licensed by Hasbro, it is nonetheless strikingly different from the American original. The plastic potato is a different shade of brown, and most of the accessory pieces are also differently colored and shaped. There was also a licensed character unique to England at this time: Mr. Egg Bodd, a hard-boiled egg man with an egg cup outfit he could wear. Sadly, I've yet to find one, but I remain hopeful. 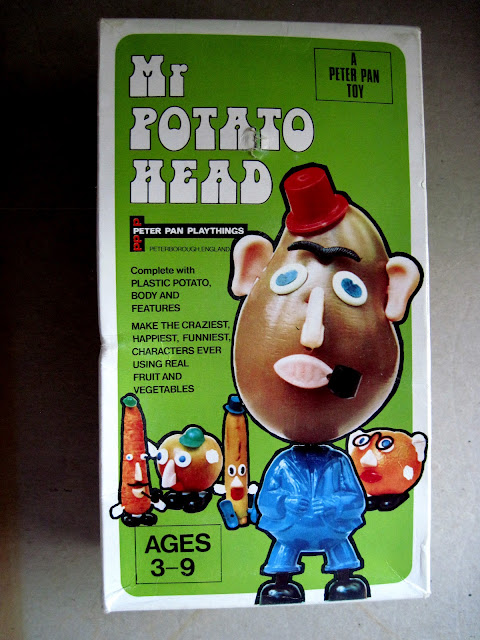 Even though Mr. Potato Head came with a plastic potato by this time, this box depicts his friends made from real fruit and veggies. The art design of this box is quite crude compared to the richly illustrated German examples posted yesterday, but it has its own naive appeal. 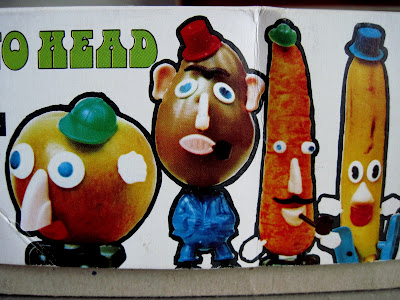 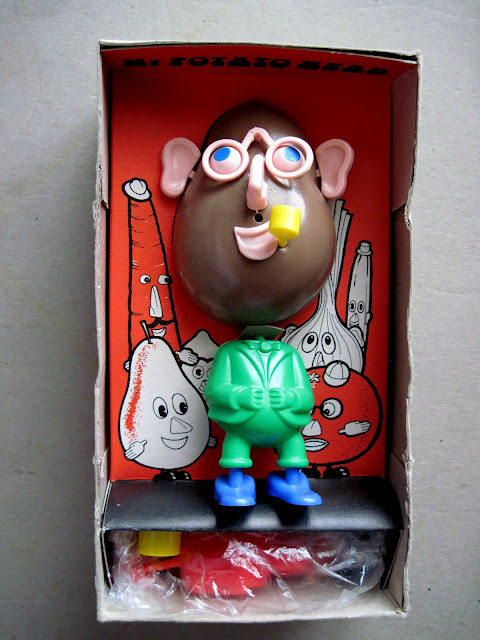 Here's the British Mr. Potato Head inside his box,
surrounded by his simply drawn but charming friends.
Posted by Tracy at Monday, May 28, 2012 No comments:

I recently acquired several vintage 1950s-60s West German and English Mr. Potato Head sets. Some are knock-offs, some were licensed by Hasbro, but they're all fascinatingly different from their American counterparts.

First up: three 1950s knock-off sets made in West Germany. They are all housed in flat cardboard boxes, the same size and shape as those a paper doll set would come in, or a tiddlywinks game. They were released at the time Mr. Potato Head still used real potatoes; the toy sets were comprised solely of accessory and limb parts, and it would be several years before the plastic potato was introduced. 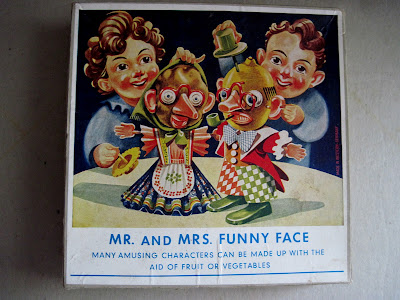 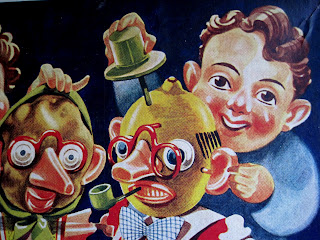 Inside, the parts are inserted into holes in the liner, and an illustration of an anxious-looking potato head with a Salvador Dali mustache serves as an example of a completed toy. 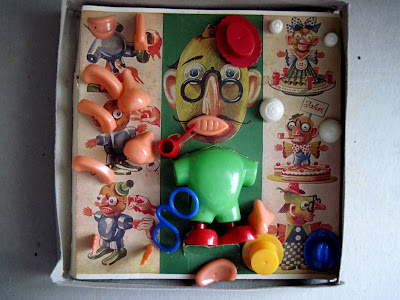 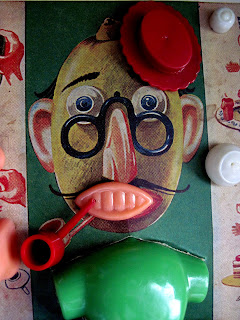 If Dali were a potato...

The next West German set features marvelous illustrations of fruit and veggie people on the cover. 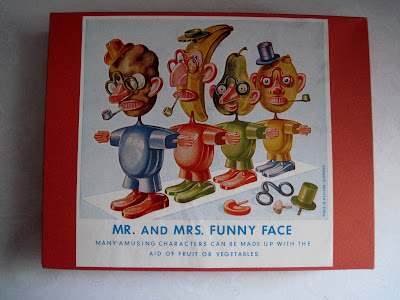 The caption reads:
"MANY AMUSING CHARACTERS CAN BE MADE UP WITH THE AID OF
FRUIT OR VEGETABLES."

The interior is similar to that of the previous set: 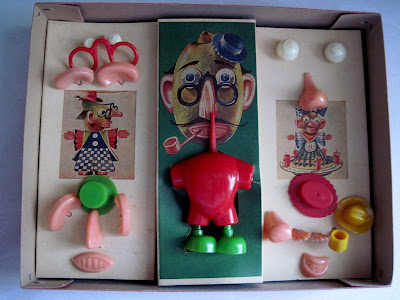 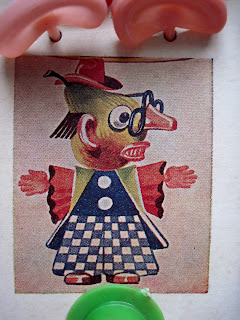 The last German set is more colorful and friendly seeming,
with bright colors and a happier looking Mr. P-Head. 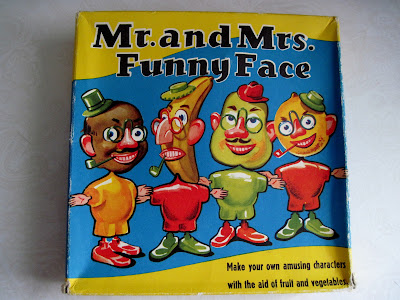 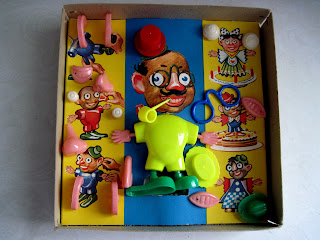 Inside the "Mr. and Mrs. Funny Face" box. 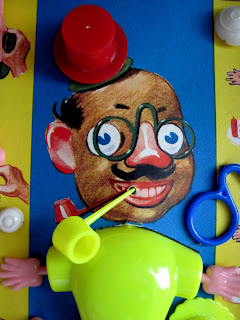 This one's a jolly potato head, with a prominent pipe.

Coming up tomorrow: a licensed Mr. Potato Head made in England in the 1970s.

Here are some snaps of a superhero themed display case I installed at my library for the month of May. Each year in May the comics industry sponsors Free Comic Book Day, a promotion run through comic shops that offers free comics to visitors. Public libraries have also begun participating in this event, and many run related events like superhero parties and comic drawing classes.

We had a really fun superhero party, and the display case served as additional advertising for the event. I filled the case with vintage Mego action figures, board games, Halloween costumes, and more. See what you can spot! 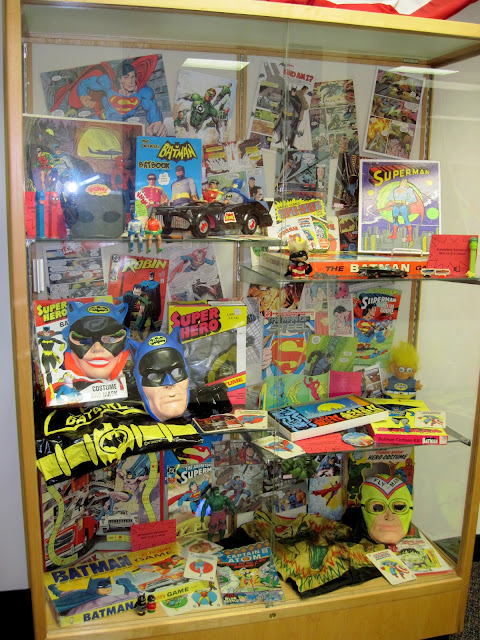 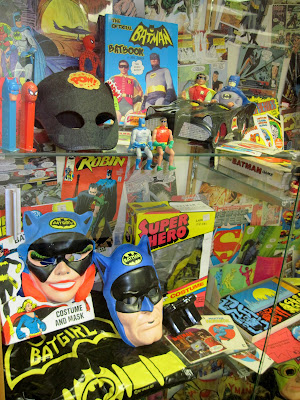 Vintage Batman and Batgirl costumes, a super-cool Bat-hat, and the Mego Batmobile. 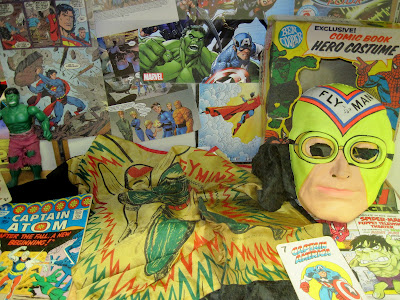 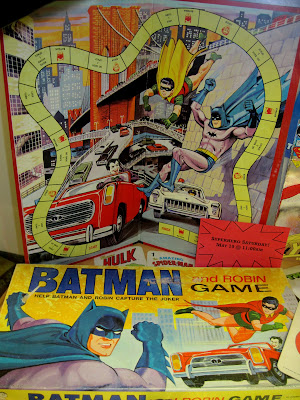 A vintage Batman and Robin board game with spectacular graphics. 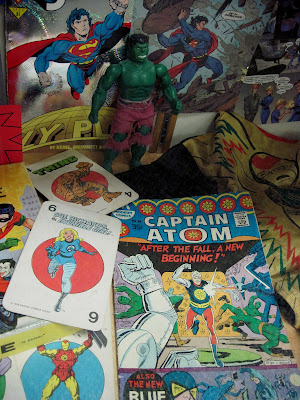 An old Captain Atom comic and a Mego Hulk.

Just found this funny antique teddy bear at a weekend show. The 14 inch ted dates from the 1920s, and has some of the biggest ears I've ever seen on a bear. His comical face caught our attention from an aisle away, and he just seemed to be saying, "Please take me home." So of course we did. 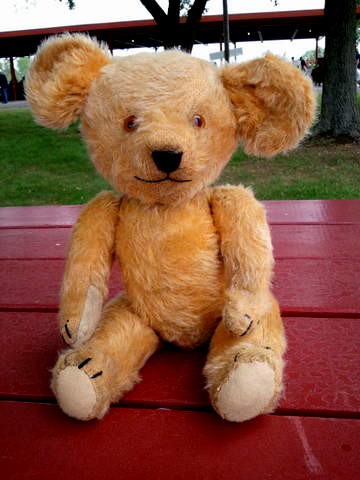 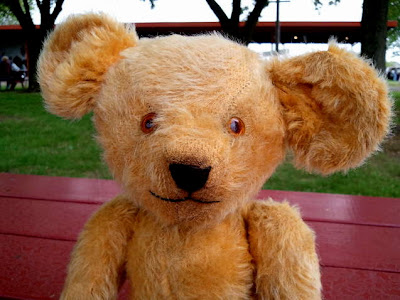 Vintage games are some of my favorite toys to collect. This one, circa the 1950s, features a 16 inch wide tin litho playing board with wooden balls. The object is to roll the balls into the corresponding colored cups. (It is much harder than it looks!) Delightful little gnomes point the way to high scores. 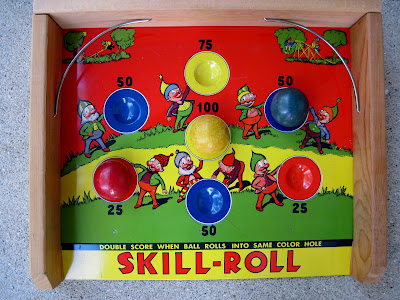 The little gnomes are adorable: 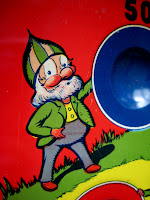 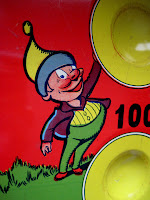 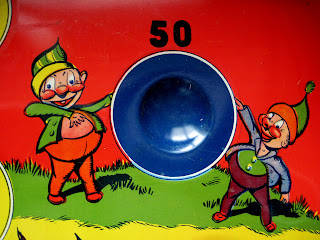 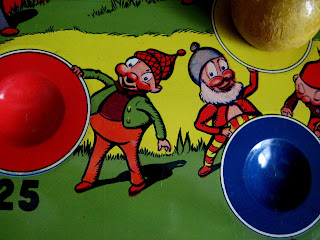 It's Only a Paper Moon Postcard

Old postcards and photographs comprise some of the Other Stuff I collect besides toys. This is a real photo postcard from 1912, sent by a woman named Fannie to her younger sister on September 5. It's one of a type known as "Paper Moon Photo Postcards." These were real photos taken of people using a paper moon backdrop, usually done at fairs or carnivals and sold as souvenirs.

Some fabulous examples of paper moon postcards as well as the lyrics and music to the contemporary song, "It's Only a Paper Moon," can be found at the Daily Postcard site, here. 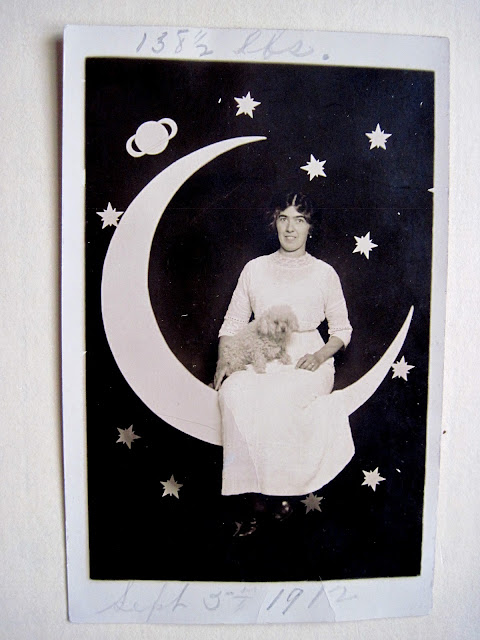 For some reason, the sender felt it was important to write this woman's weight across the top of the card: 158 1/2 pounds. At least, I'm assuming that's her weight, and not that of her little dog.
Posted by Tracy at Saturday, May 05, 2012 3 comments: