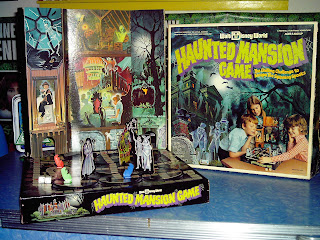 If I had to choose one vintage board game as my most favorite of all time, this would be it: the classic Disney Haunted Mansion Game made by Lakeside in the 1970s. Based on the beloved attraction at Walt Disney World, the game beautifully recreated its scenes and specters.

I had this game as a child, and my sister, cousins, and I played it over and over, until the game literally disintegrated. Last year, I finally decided my nostalgic yearning was strong enough to justify paying the steep asking price for a decent example. Now, we play it again, but very, very carefully!
Posted by Tracy at Wednesday, October 07, 2009