I have a tremendous love for tacky old roadside tourist attractions, and am fortunate enough to live in a state that still abounds in them.
Last week my friend and I took a little vacation and went up to the Mackinac Straits, visiting Mackinaw City (below the mighty Mackinac Bridge) and St. Ignace and Whitefish Point (above the bridge). This area is rich in many things: history, as it was home first to Native American tribes and later to scuffling between the French and British militaries; great natural beauty, as it's the spot where Lakes Michigan and Huron meet and the forested bluffs of the Upper Peninsula begin; and lots and lots of tourist attractions, as we're drawn to it for all three of these reasons.

I was delighted to find that several of the old souvenir shops of my childhood still exist, and what's more, they still have abundant caches of old store stock: vintage tchotchkes dating back to the 1940s and occasionally even earlier. 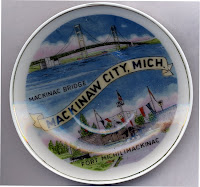 In Mackinaw, I found this great 4 inch souvenir plate, Made In Japan and dating from the 1950s or thereabouts.

Also found was this souvenir postcard packet from Mackinac Island, printed in 1935. It's a beautiful vintage object in its own right, but its made even more fascinating by the inscription on the address lines, which reads: "Day Jack Porter will never forget. August 10 - 1952. 3rd Honeymoon." At first I thought, "oh, how sweet, that Jack Porter, whoever he is, was so romantically inclined that he penned this little note on their souvenir

Now, for those who don't know, Mackinac Island is a beautiful and remote resort island in northern Michigan. It has an historic old fort, Victorian period shops and hotels, and spectactular natural beauty. It is also car-free, so to get around you have to walk, ride a bike, or hire a horse drawn carriage. I can't tell from his words whether Jack enjoyed his walk around the island with June, or if instead he secretly resented it, but I find myself wondering. Are they still married? Did they ever go back to the island? Did he hold a grudge for the next 40 years?

Next, here's a peek into one of my favorite attractions from this area: Castle Rock in St. Ignace. The rock is a huge limestone outcrop that rises over 200 feet above the Lake Huron shoreline. From the top, there's a breathtaking view of the waters and forests of the Straits area. People love to climb it, so naturally an enterprising person built a souvenir shack at the bottom, and later added giant homemade sculptures of Paul Bunyan and Babe the

Blue Ox, just for good measure. From inside the gift shop (where you can buy Paul and Babe salt and pepper shakers), you follow Paul's footprints along the floor and out the door to the climbing trail (after you pay your .50 admission, that is). Here's a picture from inside the gift shop showing "Paul Bunyan's Footprints", along with old and new postcards from the attraction. 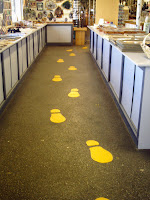