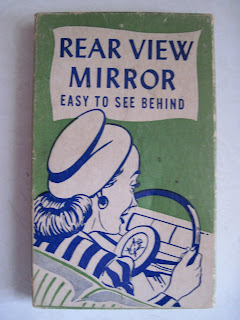 This little box is the size of a postcard, with a depth of about half an inch. The front advertises its contents as a "rear view mirror", while the back has space for an address and postage stamp:
these could actually be mailed. 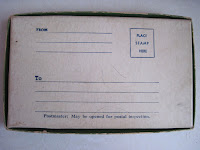 The joke is apparent once the box is opened: 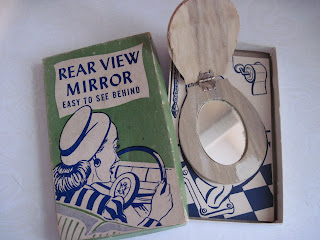 There were hundreds of different mailable joke boxes like this one available in the 1940s and 50s, when they were all the rage for a time. This one was made by H. Fishlove & Co. of Chicago, a novelty company founded in 1914 which was one of the most creative of the joke box manufacturers.
The Shine Gallery has a large selection of old-store-stock joke boxes for sale, but sadly, I don't think you can mail them anymore...
Bang Gun, 1940s 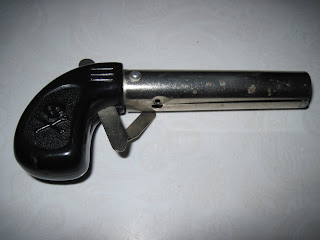 A classic gag straight out of the old Saturday morning cartoons, the Bang Gun has a barrel containing a rolled up silk flag with the word "BANG" printed on it. When the trigger is pulled, the barrel springs open and the flag unfurls, revealing the words. The open gun measures 8 inches long. Not recommended for use on the easily startled. 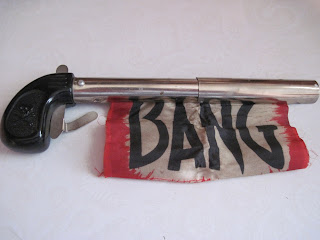 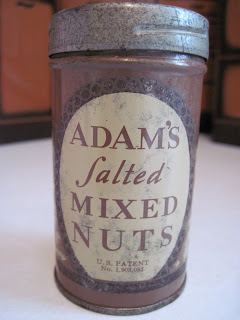 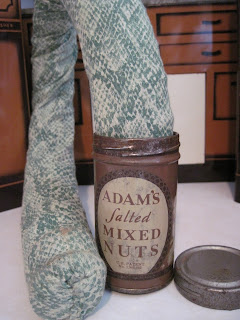 Another classic, the Snake Nut Can is still being made by the S.S. Adams Company of Asbury Park, New Jersey. This one probably dates to the 1930s. The can is all metal, while the snake features a fabric skin over a very strong metal coil spring. No one is fooled by this anymore; I've tried.
Trick Safety Pin, 1950s 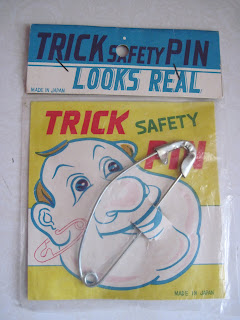 I love the graphics on the package for this Trick Safety Pin Through the Nose gag, made in Japan circa the 1950s. He looks awfully jolly for having a pin stuck through his face.
If you like vintage pranks and gags, you'll love these books:
Cheap Laffs: the Art of the Novelty Item, by Mark Newgarden
and
Life of the Party: A Visual History of the S.S. Adams Company, Makers of Pranks and Magic for 100 Years, by Kirk Demarais.
Posted by Tracy at Thursday, April 01, 2010