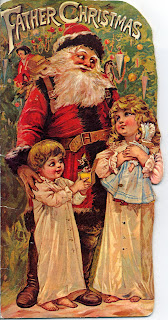 I love holiday paraphernalia, and I especially enjoy discovering unusual items. Such as these Santas...our modern Santa is a friendly, jolly guy, but historically, there were a lot of creepy versions.

First up: this old book. Something just appears...off...about Santa's expression. I don't know what look the artist was going for here, but I don't think he intended it to be "crazy eyes." Santa looks rather like he's considering cooking and eating this child, doesn't he? (click the picture to see the horribleness in greater detail...)

Next, from my collection of vintage plastic Santas: this 14 inch example we refer to as "Ecstasy Claus," with his drug-induced, hyper-dilated pupils. Sometimes I have to turn him around, he creeps me out so much. 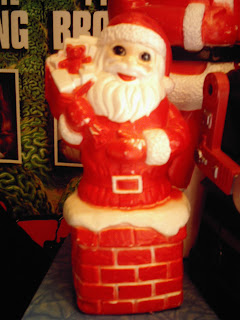 Lastly, this huge 3 1/2 foot plastic motorized 1950s Santa: he's hinged at the waist, and when operating, we think it's meant to appear as if he is doubling over with laughter as he "ho-ho-hos". But the effect is more one of a severe back cramp, or perhaps stomach pain, possibly even a heart attack, as his hands are clasped to his chest. Click below for video. 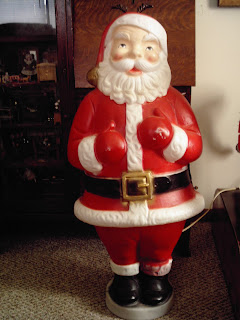