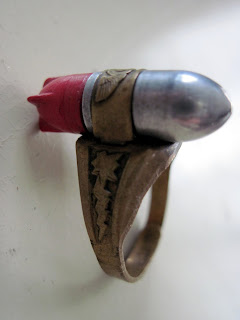 The 1947 Lone Ranger Atomic Bomb Ring, a Kix cereal promotion, was the best-selling premium ring of all time. And no wonder --  who could resist advertising like this: 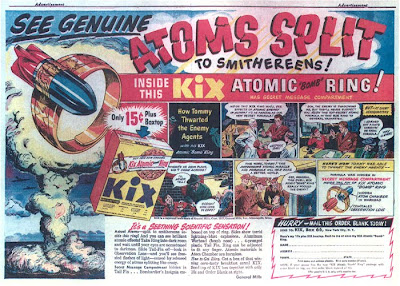 "SEE GENUINE ATOMS SPLIT TO SMITHEREENS!
INSIDE THIS Kix ATOMIC 'BOMB' RING!"
The ring cleverly combined the Lone Ranger's silver bullet iconography with that of the new atomic sciences. And it did indeed work: the "bullet" or "bomb" was actually a device called a spinthariscope, which enables the viewer to see nuclear disintegrations caused by the interaction of radioisotopes. As polonium alpha particles struck a zinc sulfide screen, brilliant flashes of light resulted which could be seen by removing the red end cap.

Fortunately (or unfortunately, depending on your point of view and comfort level with radioactive substances) the materials had a very short half-life, and the rings no longer function today. And even though the ad says the rings are "perfectly safe -- we guarantee you can wear the Kix Atomic 'Bomb' ring with complete safety. The atomic materials inside the ring are harmless," I still feel a bit nervous every time I pick mine up.