I love gnomes, and they comprise a major category of the "other stuff" I collect. The oldest gnomes in my collection are these miniature terracotta versions, made in Germany in the 1920s-30s. 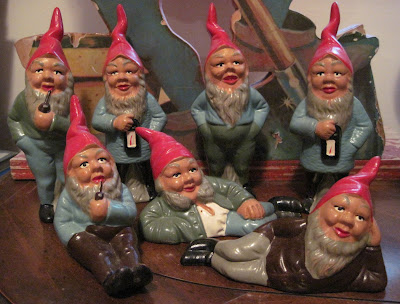 They're an expressive bunch of little guys, measuring 6 inches tall. 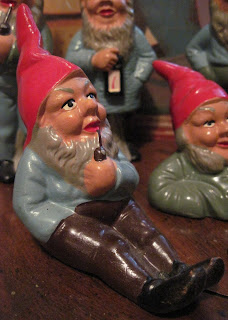 One of my favorites in this set is the smoking gnome. He reminds me of that photo of J.R.R. Tolkien that's on most of his books. He's holding his pipe in just the same way, and looks like he's about to say something both jovial and profound.

And then there's this gnome, lying about in a leisurely fashion, with rather a "come-hither" look on his face. His friend in the background is even more obviously "on the make": check out the open shirt and wanton expression. (He's also the only gnome I've ever seen with muttonchop sideburns instead of the traditional long gnome beard.) 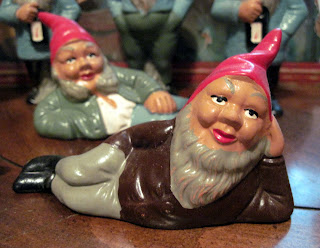 Hard-working garden gnomes, these are not.
Posted by Tracy at Thursday, September 23, 2010