Mod-era Barbie clothes are just fantastic things, reflecting the daring, day-glo designs of their time (1967-1972). The individual outfits were given creative names by their designers, like "Maxi 'n Mini," "Knit Hit," and "Velvet Venture." They are also fragile things, made of glittery metallic and foiled fabric, velveteen, vinyl, and synthetic fur. These two factors combine to make mod-era Barbie fashions desirable, scarce, and costly. I've not been willing to pay the extortion-level prices usually asked for such pieces, and so my mod Barbies have sadly remained naked. Until now.

While browsing some sales late last week, I stumbled upon a "bargain box" full of modern (1990s-2000s) Barbies. I was going to pass over them, as modern Barbies don't interest me much...but then I thought I better take a closer look at the box "just in case."

Well, it's a good thing I did: the contemporary Barbies were all clothed in original 1960s mod-era fashions, including some of the most highly sought Barbie clothes out there. Each doll was priced at $2.00, and at the bottom of the box was a plastic baggie filled with more mod pieces, the whole bag labelled $3.00. The score was about $250.00 worth of vintage Barbie clothes for $9.00! 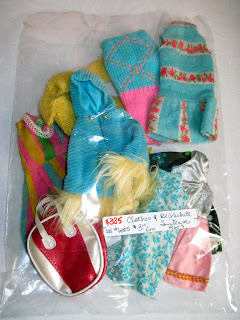 In the bag were the sleeveless minidresses "Knit Hit" & "Togetherness" (upper right), Francie's far-out and furry turquoise corduroy poncho (center), and 2 pieces from Sears' exclusive "Glamour Group" (bottom right), as well as a cool bowling bag and some vintage shoes. 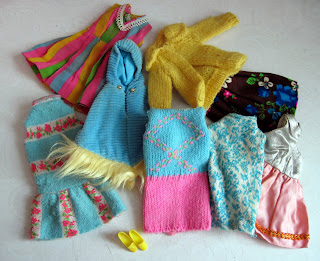 After I recovered from my swoon, I rushed the Barbies home, where they were stripped and given to a friend who likes the new dolls. The vintage clothes were gleefully adopted by my mod Barbies, who model them below. 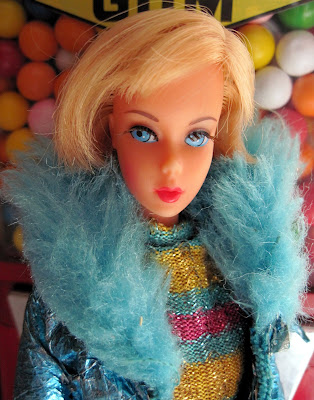 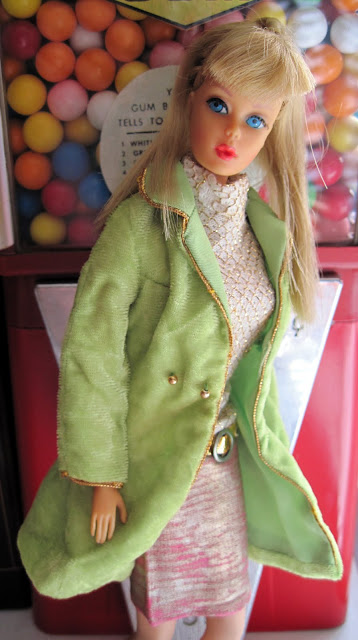 My brunette Hair Fair Barbie showcases one of the mod-era's day-glo outfits, which was named "Hurray for Leather" by Mattel designers who were apparently unaware of the naughty allusions this title could stir up amongst a certain group of sex fetishists. Unfortunate naming aside, this is one of the coolest of the mod fashions, consisting of a leather-look yellow vinyl miniskirt with day-glo orange shag trim that matches the sweater, completed with yellow "pilgrim" shoes.

She's ready for a night of go-go dancing...
My mod Barbies are thrilled with their extensive new (and cheap!) wardrobe. 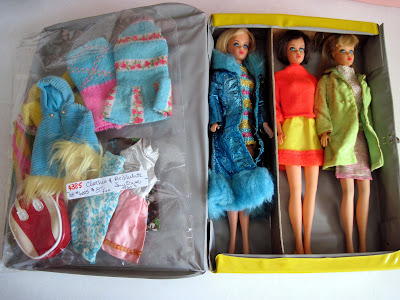