A few months ago, back when I did my troll blog-a-thon, I mentioned my longing for the elusive 1960s Marx Troll Village playset. I finally got one for my birthday: yay! 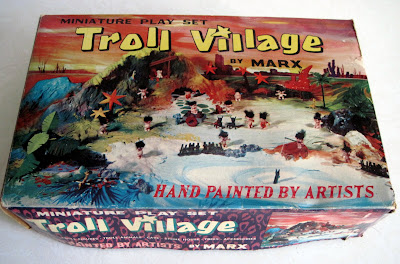 The Marx Toy Company made all sorts of playsets like these back in the 1950s and '60s: western ranches, medieval castles, army forts, family farms, and pretty much any other imaginative setting a kid could want, complete with tiny figures, buildings, and a box or case that held all the parts.

The Troll Village is one of their most unusual such sets, as well as one of their smallest. The box measures 10 inches wide, and the little trolls within are only 1 1/2 inches tall, the size of a typical gumball machine prize troll. The set includes trolls, animals, fences, rocks, trees and foliage, a little house, and caves. Originally it also had a printed vinyl playmat, but this is often missing from the set, as it is with mine. Still, it's a fantastic toy for troll lovers, and no good troll collection can consider itself complete without one. 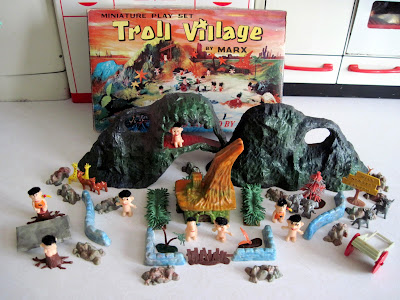 The village. As you can see, many pieces are delightfully
out of scale with each other. 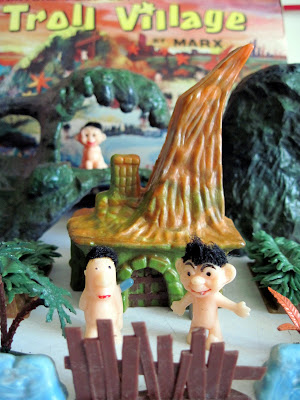 The little troll house is just 4 inches tall, with a crazy roofline. 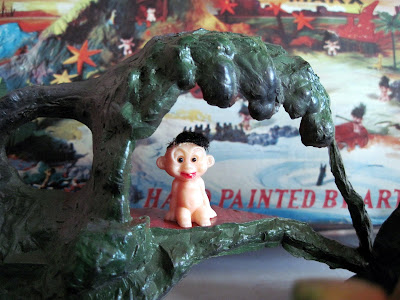 Hangin' out in the troll cave... 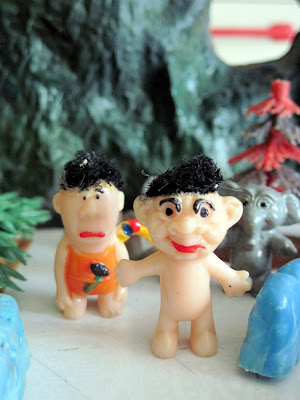 Two of Troll Village's denizens.
As you can see from the troll in the back,
the village is not officially a nudist colony. 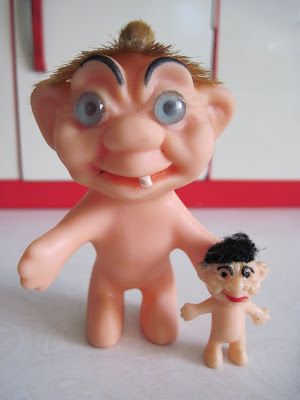 For a sense of scale, a Troll Village troll is on the right,
next to a standard-sized, 3 inch troll
also made by Marx. Their trolls have a very distinctive appearance.
Posted by Tracy at Thursday, June 10, 2010